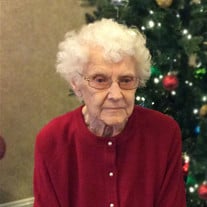 Alberta W. Hawkins, 97, of St. Charles, passed away on Saturday, January 9, 2016 at the St. Joseph Hospital in St. Charles. She was born on July 18, 1918 on a farm in Elsberry, the daughter of the late Ezra and Edna (Brown) Tillotson. She was united in marriage to Wesley Hawkins on February 14, 1940 and he preceded her in death on March 14, 2002. Alberta worked at the Glove Factory for several years, later a Paper Mill in St. Helen’s, Oregon, a Spinach Factory and while Wesley was stationed overseas she decided to be closer to family and went back to work at the Glove Factory. When Wesley was honorably discharged from the Army, they moved to Troy for several years and later called St. Charles Home, that’s when Alberta decided to be homemaker. In her earlier years she loved fishing but spent most of her time baiting Wesley’s hook, they shared many wonderful years together. Alberta enjoyed her flower beds, shopping and catching up with friends over a good meal and she loved her family dearly. She is survived by her one sister, Bobby Dean Fox of Eolia; one sister-in-law, Vernetta Penn of St. Charles; many nieces, nephews, great-nieces, great-nephews, cousins and friends. She was preceded in death by her parents, her husband and six siblings, Kathryn Tillotson, Floy Taylor, Serena McClellan, Arthur Tillotson, Mary Teasley and George Tillotson. Family and friends will be received from 9:00 a.m. to 11:00 a.m. on Tuesday, January 12, 2016 at the KEMPER-MILLARD-KEIM FAMILY FUNERAL HOME/TROY CHAPEL located at 351 Monroe Street Troy, MO 63379. Funeral service will be held 11:00 a.m. at the Chapel. Officiating the service will be Pastor Ken Gottman. Interment will be held at the Old Alexandria Cemetery. Serving as pallbearers are: Dennis Fox, Wayne Tillotson, Randy Teasley, Brent Teasley, Darrell Brugger, Drew Hanneke, Ben Bextermueller and Lance Fox. Expressions of sympathy may be made to the First United Methodist Church, in care of Kemper-Millard-Keim Family Funeral Chapels, P.O. Box 222 Troy, MO 63379. Online condolences may be made at www.kempermillardkeimfamilychapels.com Phone 636-528-8221

Alberta W. Hawkins, 97, of St. Charles, passed away on Saturday, January 9, 2016 at the St. Joseph Hospital in St. Charles. She was born on July 18, 1918 on a farm in Elsberry, the daughter of the late Ezra and Edna (Brown) Tillotson. She was... View Obituary & Service Information

The family of Alberta W. Hawkins created this Life Tributes page to make it easy to share your memories.

Send flowers to the Hawkins family.