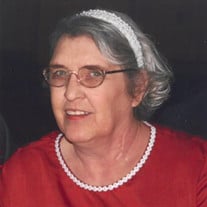 Alberta Louise Twellmann, 70, of Moscow Mills, Missouri, passed away on Monday, October 22, 2018 in Moscow Mills, Missouri. She was born on August 26, 1948 in St. Charles, Missouri and a daughter of the late John Robert and Blanche Elizabeth (Callaway) Mershon. She married Ronald “Curly” Twellmann, on December 20, 1971 at the Asbury Church and to this union one son was born. Curly preceded her in death on July 5, 2009. Alberta attended Troy Buchanan High School and entered the United States Army, where she was honorably discharged. She worked at the Four Seasons for many years, but retired from Bodine Aluminum in 2008 after 15 years of dedication. Alberta was an active member at the United Methodist Church in Moscow Mills where she was active in various activities. She enjoyed sewing, cross stitching, knitting and making afghans. Alberta took great pride in spoiling her grandchildren and giving them too much candy. Alberta is survived by her one son: Charles Twellmann and wife Amy of Troy, Missouri; four grandchildren: Tyler, Madyson, Paige and Luke; siblings: Martha Taylor of Warrenton, Linda Hoffman (Steve) of Phoenix, AZ, Gail Hopkins of NC, Eileen Nett (Jim) of Perry, Thomas Mershon (Sandy) of Troy and Richard Mershon of Moscow Mills; nieces, nephews, cousin and many friends. She was preceded in death by her parents John and Blanche Mershon, her husband, Ronald “Curly” Twellmann, one brother, Charles “Charlie” Theodore Mershon, father-in-law and mother-in-law: Ray and Darline Twellmann and one brother-in-law, Lux Taylor. Friends will be received from 4:00 p.m. to 8:00 p.m. on Friday, October 26, 2018 at KEMPER- MILLARD-KEIM Family Funeral Home / Troy Chapel. Funeral services will be held at 10:00 a.m. on Saturday, October 27, 2018 at KEMPER- MILLARD-KEIM Family Funeral Home / Troy Chapel. Interment will be held at Anderson Hill Cemetery. In lieu of flowers expressions of sympathy may be made to the American Heart Association in care of KEMPER-MILLARD-KEIM Family Funeral Chapel, P.O. Box 222 Troy, MO 63379. Arrangements are under the direction of KEMPER-MILLARD-KEIM Family Funeral Chapel; 351 Monroe Street Troy, MO 63379. Online condolences may be made at www.kempermillardkeimfamilyfuneralchapel.com Phone 636-528-8221

The family of Alberta Louise Twellmann created this Life Tributes page to make it easy to share your memories.

Send flowers to the Twellmann family.