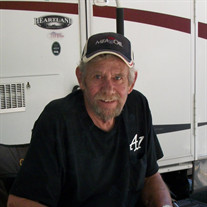 Alfred "Al" B. Billings, 68 of Troy, Missouri, made his appointment with the Lord on Monday, October 17, 2016 at the Mercy Hospital in St. Louis, Missouri. He was born on April 10, 1948 in Hannibal and was the son of Carl and Benny (Foster) Billings. Al married the love of his life Donna on September 8, 2007 in Troy, Missouri. Al started his employment with Missouri Power and Light on June 13, 1983 in Hamilton and was later acquired by Ameren UE on January 1, 1984. He worked as a lineman for many years and retired on April 1, 2007 as an Electrician Mechanic Lead Worker at the Substation West in Wentzville, MO and was a member of IBEW Local #2. He was blessed with an amazing voice, learned how to play the guitar and was a member of a band. He enjoyed fishing and hunting, especially turkey and deer. Al went on the hunting trip of his lifetime to Canada, Black Bear hunting and he had the best stories to share of his hunting adventures. Donna and Al loved camping at Indian Creek Camp, along with various other places. He enjoyed social hour every Friday night at the Tattooed Lady in Moscow Mills. Al knew how to live life to its fullest and loved spending time with his family. Al is survived by his loving wife Donna Billings of Troy; two sons: Ben Billings (Sherry) of Bowling Green and Darin Billings (Cathy) of Perry; three daughters: Melissa Fitzsimons (Tom) of Frankford, Dawn Billings (Gene Leverenz) of Bowling Green and Sheena Chaplin (Kelly Smith) of Hannibal; bonus children: Tracy Jackson (Doug) of West Point, Chris Thurman (Jamie) of Troy and Sara Colbert (Daniel) of Troy; two sisters: Carla Hamilton of Hannibal and Janie Jones (Joe) of Camdenton; one brother, William “Bill” Billings of Frankford; Poppy to his grandchildren: Samantha Asbell, Brandon Billings (Lindsay), Grace Billings, Kaitlyn Friedlein (Shawn), Elizabeth Fitzsimons, Alyssa Billings (Michael White), Deanna Taylor, Jennifer McCurdy (Tyler Pickett), Jessica Billings, Jarik Chaplin, Lincoln Chaplin, Tanner Leffler, Sydney Thurman, Lucy Thurman, Duncan, Darwin and Deizel Jackson; great-grandfather to many, nieces, nephews, cousins and many friends. He was preceded in death by his father Carl, mother Benny and one sister-in-law Donna. Friends will be received from 4:00 p.m. to 7:00 p.m. on Friday, October 21, 2016 at Kemper-Millard-Keim Family Funeral Chapel, located at 351 Monroe St. Troy Mo, MO 63379. A celebration of Al’s life will be held at 7:00 p.m. on Friday, October 21, 2016 at the Chapel. In lieu of flowers expressions of sympathy may be made to American Cancer Society in care of Kemper-Millard-Keim Family Funeral Chapel P.O. Box 222 Troy, MO 63379. Arrangements are under the direction of Kemper-Millard-Keim Family Funeral Chapel; 351 Monroe Street, Troy, Missouri 63379. Online condolences may be made at www.kempermillardkeimfamilyfuneralchapel.com Phone 636-528-8221

Alfred "Al" B. Billings, 68 of Troy, Missouri, made his appointment with the Lord on Monday, October 17, 2016 at the Mercy Hospital in St. Louis, Missouri. He was born on April 10, 1948 in Hannibal and was the son of Carl and Benny (Foster)... View Obituary & Service Information

The family of Alfred "Al" B. Billings created this Life Tributes page to make it easy to share your memories.

Alfred &quot;Al&quot; B. Billings, 68 of Troy, Missouri, made his appointment...

Send flowers to the Billings family.