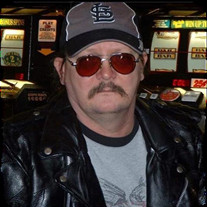 Allen Dale Fisher, 62, of Elsberry, Missouri, passed away on Sunday, August 9, 2020 at SSM St. Joseph Hospital West in Lake Saint Louis, Missouri. He was born on November 13, 1957 in Tucson, Arizona, and the son of Robert G. and Edna M. (Moberly) Fisher. Allen graduated High School and served his country in the United States Navy and was honorably discharged. He was retired as an AMS after over 20 years and later worked at the Bowling Green Correctional Facility. In his earlier years he liked drawing. Allen enjoyed playing video games and riding motorcycles. He was a strong willed man and loved unconditionally. He is survived by his wife, Raylene Fisher of Elsberry, MO; one daughter and one son: Christina Robinson of Moscow Mills and Jason Fisher of Elsberry, MO; two grandchildren: Kaila and Jaclyn Robinson; aunts, nieces, nephews, cousins and friends. He was preceded in death by his parents, one brother, Robin Fisher and one grandson, Joseph Robinson. Family and friends will be received from 2:00 p.m. to 4:00 p.m. on Monday, August 17, 2020 at KEMPER-MILLARD-KEIM Family Funeral Chapel, located at 351 Monroe Street Troy, MO 63379. Funeral service will be held at 4:00 p.m. at KEMPER-MILLARD-KEIM Family Funeral Chapel in Troy, MO. In lieu of flowers, expressions of sympathy may be made to Gentle Flutters in care of Kemper-Millard-Keim Family Funeral Chapel, P.O. Box 222 Troy, MO 63379. Arrangements are under the direction of Kemper-Millard-Keim Family Funeral Chapel; 351 Monroe Street Troy, MO 63379. Online condolences may be made at www.kempermillardkeimfamilyfuneralchapel.com Phone 636-528-8221.

The family of Allen Dale Fisher created this Life Tributes page to make it easy to share your memories.

Allen Dale Fisher, 62, of Elsberry, Missouri, passed away on...

Send flowers to the Fisher family.