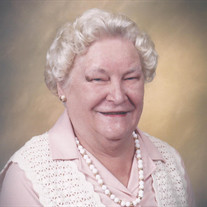 Angela Mary Toebben, 91, of Warrenton, Missouri, passed away on Wednesday, January 14, 2015 at St. Joseph Hospital West in Lake Saint Louis. She was born February 16, 1923 in Florissant, Missouri, a daughter of the late Frank and Mary Hoormann. Angela was united in marriage to John Toebben, Jr. on June 4, 1947 at the Sacred Heart Catholic Church in Florissant, and he preceded her in death on October 24, 1984. To this union five sons and two daughters were born. Angela and John moved to Warrenton in 1955. She was a homemaker and taking care of her family was her top priority. Angela had a passion for quilting and she made all of her quilts with lots of love. She enjoyed cooking, her specialty dishes were fried chicken and stew. Angela loved to play card games, she would spend hours playing pinochle and rummy with her family. She was a member of the St. Mary’s Catholic Church in Hawk Point and the Altar Sodality. She is survived by her seven children, Edward “Ed” Toebben and wife, LeeRoy of Warrenton, James “Jim” Toebben and wife, Dixie of Hawk Point, Joan Jones and husband, Jack of Hawk Point, Stephen “Steve” Toebben and wife, Phyllis of Troy, Daniel “Danny” Toebben of Warrenton, Kathryn “Kathy” Davis and husband, Dennis of Warrenton and John Toebben III and wife, Debbie of Warrenton; twenty grandchildren, twenty-nine great-grandchildren, nieces, nephews, cousins, numerous relatives and many friends. She was preceded in death by her parents, her husband, four sisters, one brother and one granddaughter, Amy Toebben-Robinett. Friends will be received from 4:00 p.m. to 8:00 p.m. Friday, January 16, 2015 at KEMPER-MILLARD-KEIM Family Funeral Home/Hawk Point Chapel, located at 41 Farm Lane Hawk Point, MO 63349. Funeral Mass will be held at 10:00 a.m. on Saturday, January 17, 2015 at St. Mary’s Catholic Church. Officiating the mass will be Fr. John Keenoy. Interment will be held at the St. Mary’s Cemetery in Hawk Point. Expressions of sympathy may be made to Masses, under the direction of Kemper-Millard-Keim Family Funeral Chapels P.O. Box 222 Troy, MO 63379. Online condolences may be made at www.kempermillardkeimfamilychapels.com (636) 338-4375.

Angela Mary Toebben, 91, of Warrenton, Missouri, passed away on Wednesday, January 14, 2015 at St. Joseph Hospital West in Lake Saint Louis. She was born February 16, 1923 in Florissant, Missouri, a daughter of the late Frank and Mary Hoormann.... View Obituary & Service Information

The family of Angela Mary Toebben created this Life Tributes page to make it easy to share your memories.

Send flowers to the Toebben family.