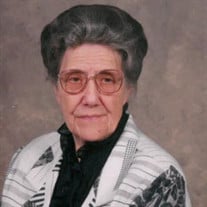 Ann Elizabeth Lavy, 92, of Bellflower, Missouri, passed away peacefully on Monday, September 9, 2019 at The Bluffs in Columbia, Missouri. She was born April 7, 1927 in Missouri to Artie and Stella (Riffle) Palmer. She was united in marriage to W. Delrey Lavy and he preceded her in death. To this union three daughters and one son were born. Ann was a homemaker and spent countless hours on the family farm. She enjoyed the memories made with her family. She was an amazing cook, who was known for her catfish, hushpuppies and blackberry cobbler. Ann was a member of the United Pentecostal Church where she sang solo’s, taught Sunday School and spent many hours helping in the kitchen. Ann had a true love for cats and dogs. She enjoyed quilting, mowing and gardening. Ann had a great sense of humor and was always thankful for what she had in life. She is survived by her three daughters: Durella Gibble of Milford, DE, Sherry Lavy of Sparks, NV, and Debby Henke of Hallsville, MO; one daughter-in-law, Sandy Lavy of Auxvasse, MO; seven grandchildren: Stefanie Jones, Nathan Jones, Nick Boschert, Justina Boschert Uruchima (Angel Uruchima), Zane Lavy (Samantha Lavy), Zeth Lavy and Zach Lavy; great-grandchildren: Megan Jones, Dustin Jones, Kasey Jones, Lucas Uruchima, Eli Uruchima, Lachie Uruchima; cousins and friends. She was preceded in death by her parents, Artie and Stella Palmer, husband, W. Delrey Lavy, one son, Denny Lavy, two sons-in-law: Don Gibble and John Henke. Friends will be received from 5:00 p.m. to 8:00 p.m. on Tuesday, September 17, 2019 at KEMPER-MILLARD-KEIM Family Funeral Chapel, located at 351 Monroe Street Troy, MO 63379. Funeral service will be held at 11:00 a.m. on Wednesday, September 18, 2019 at KEMPER-MILLARD-KEIM Family Funeral Chapel in Troy, MO. Interment will be held in Wilson Cemetery near Troy, MO. In lieu of flowers expressions of sympathy may be made to American Funds in care of Denny Lavy Athletic Scholarship in care of KEMPER-MILLARD-KEIM Family Funeral Chapel; P.O. Box 222, Troy, MO 63379. Online condolences may be made at www.kempermillardkeimfamilyfuneralchapel.com Ph.(636) 528-8221

Ann Elizabeth Lavy, 92, of Bellflower, Missouri, passed away peacefully on Monday, September 9, 2019 at The Bluffs in Columbia, Missouri. She was born April 7, 1927 in Missouri to Artie and Stella (Riffle) Palmer. She was united in marriage... View Obituary & Service Information

The family of Ann Elizabeth Lavy created this Life Tributes page to make it easy to share your memories.

Send flowers to the Lavy family.