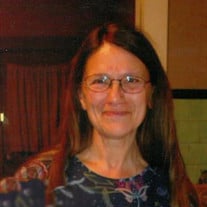 Ann M. Lawrence, 68, of Hawk Point, Missouri, passed away peacefully on Friday, April 12, 2019 at Evelyn’s House in Creve Coeur, Missouri. She was born on September 29, 1950 and the daughter of the William and Dolores D. (Holba) Vejvoda. She was united in marriage to William “Bill” Lawrence on May 11, 1973 at the St. Mary’s Catholic Church in Hawk Point, Missouri and to this union two sons and two daughters were born. Ann graduated from Buchanan High in 1969. In her earlier years she worked at People’s Bank and Trust in Hawk Point and later became a homemaker. Taking care of her family and others in need, was her top priority in life. The time she spent with her grandchildren playing games and spoiling them brought her much happiness. She truly valued people over anything and always wore a smile. Ann loved to write and many friends and family looked forward to her annual Christmas card letters. Cooking, caring for animals and tending her garden were also favorite pastimes. Bill and Ann enjoyed the farm life and watching reruns of the Andy Griffin Show with their dog Buddy. She is survived by her loving husband of 45 years, William “Bill” Lawrence of Hawk Point, MO; two sons and two daughters: Christy Gaskin and husband Doug of Greenwood, MO, Angie Harris and husband Jeff of Troy, MO, Billy Lawrence and wife Alana of Attleboro, MA, and Mark Lawrence of Hawk Point, MO; siblings: JoAnn Holloway and husband Jim of Santa Fe, MO and Shirley Vejvoda of St. Charles, MO; eleven grandchildren, nieces, nephews, cousins and many friends. She was preceded in death by her father, William Vejvoda. Services will be held at a later date with KEMPER-MILLARD-KEIM Family Funeral Chapel located at 41 Farm Lane Hawk Point, MO 63349. In lieu of flowers, expressions of sympathy may be made to American Cancer Society in care of Kemper-Millard-Keim Family Funeral Chapel, P.O. Box 222 Troy, MO 63379. Arrangements are under the direction of Kemper-Millard-Keim Family Funeral Chapel; 41 Farm Lane Hawk Point, MO 63349. Online condolences may be made at www.kempermillardkeimfamilyfuneralchapel.com Phone 636-338-4375.

Ann M. Lawrence, 68, of Hawk Point, Missouri, passed away peacefully on Friday, April 12, 2019 at Evelyn&#8217;s House in Creve Coeur, Missouri. She was born on September 29, 1950 and the daughter of the William and Dolores D. (Holba) Vejvoda.... View Obituary & Service Information

The family of Ann M. Lawrence created this Life Tributes page to make it easy to share your memories.

Send flowers to the Lawrence family.