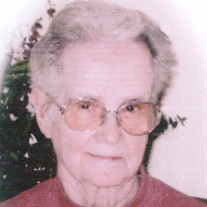 Mrs. Anna Elizabeth (Miller) Gourley, 93 of Troy, Missouri, passed away Thursday, April 17, 2014 at Troy Manor Nursing Home in Troy, Missouri. The daughter of the late Elton and Cora (Hensley) Miller, was born on May 27, 1920 in Montgomery City, Missouri. She was united in marriage to Wendell Gourley on January 4, 1942 and he preceded her in death on February 26, 1995. To this marriage one son and three daughters were born. Mrs. Gourley retired in 1983, after 26 years of employment at the Gossard Garment Factory and never wavered from her commitment to help others. She had many accomplishments in life, one of which was the beginning of the Alanon and Alcoholic anonymous meetings in Lincoln County on October 15, 1971 and is still held weekly. Mrs. Gourley work did not stop there, she even volunteered at the several prisons, monthly to help administer God’s word and be a positive influence. She held a weekly prayer group in her home, by leading Bible readings around her “Blessing Shelf.” Mrs. Gourley was always helping others, no matter what the situation may be. She was a member of the Silex Presbyterian Church for many years and lived by a simple philosophy “The more we give away, the more we receive.” Her family was her top priority in life and she loved spending time with them. She is survived by her children, David F. Gourley of New Florence, Missouri, Elza L. Turner and husband, Jim of Topeka, Kansas, Jane Runkles of Troy, Missouri and Linda Miller and husband, William of Kansas City, Missouri; one sister, Helen Ruth Myers of Montgomery City, Missouri; 12 grandchildren, Kimberly, Kyle, Angela, Wendell, Adam, Chris, Carol, Cathy, Bill, Cindy, Bradley, Lisa and Lacey; 24 great-grandchildren and another one on the way; one great-great grandchild and numerous other relatives. She was preceded in death by her parents, husband, one son, Steve Gourley, twin sister, Alta Sue, sister, Margaret and three brothers, Franklin, Bert and Flemon. Friends will be received from 11:00 a.m. to 1:30 p.m. on Monday, April 21, 2014 at Kemper-Marsh-Millard Family Funeral Home/ Troy Chapel. Funeral service will be held at 1:30 p.m. on Monday, April 21, 2014 at the Chapel. Officiating the service will be Mike Miller. Interment will be held in Montgomery City Cemetery. Expressions of sympathy may be made to the Montgomery City Cemetery or Charity of Donor’s Choice, in care of Kemper-Marsh-Millard Family Funeral Chapels P.O. Box 222 Troy, MO 63379. Online condolences may be made at www.kempermarshmillardfamilychapels.com ph. (636) 528-8221

The family of Anna Elizabeth Gourley created this Life Tributes page to make it easy to share your memories.

Send flowers to the Gourley family.