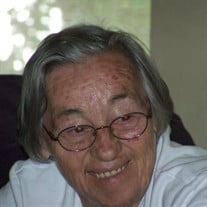 Anna Mae Hammers, 77, of Moscow Mills, Missouri, passed away peacefully on Wednesday, March 18, 2015 at her residence. She was born on June 29, 1937 in Shannon, County, MO to Ray and Ruby (Mead) Wells. Anna was united in marriage to Leon H. Mudd in March of 1957 and he preceded her in death on July 21, 1974. She later married Charlie Hammers in 1981 and he preceded her in death. Anna was a homemaker and caring for her children and grandchildren was her top priority in life. In her earlier years she enjoyed quilting, crafting and crocheting afghans. She had a passion for pets, she owned and operated Anna’s Pets for many years. Anna enjoyed being outdoors in her flower garden or even taking walks. She loved to cook, her signature dishes were fried chicken with mashed potatoes and the dinner rolls made with love. She was always looking for a deal at the local garage sales in town. Anna’s heart of gold and generosity will be deeply missed. She is survived by her loving children, Donald R. Mudd and wife Lareca of Wright City, Ronald L. Mudd and wife Debby of St. Louis, Marie McDonald and husband Mike of Moscow Mills and Margaret E. Mudd of Moscow Mills; one sister, Betty Johnson of Hawk Point; three brothers, Jimmy Johnson and wife Carol of Troy, Donald Cooley of Hawk Point, Lindell Johnson and wife Dee of Oklahoma; twelve grandchildren, many great-grandchildren, nieces, nephews, cousins, numerous relatives and friends. She was preceded in death by her parents, her two husbands, Leon Mudd and Charlie Hammers, two sisters, Sue Ferguson and Shairon Wells, one niece, Mildred Giffer. Friends will be received from 2:00 p.m. to 6:00 p.m. on Sunday, March 22, 2015 at KEMPER-MILLARD-KEIM Family Funeral Home/ Troy Chapel. Funeral service will be held at 10:00 a.m. on Monday, March 23, 2015 at the First Assembly of God located at 432 S Lincoln Dr, Troy, MO 63379. Officiating the service will be Pastor Darrell Alley. Interment will be held at the Old Alexandria Cemetery. Serving as pallbearers will be Kevin Mudd, Nathan Mudd, Ryan Mudd, David Mudd, Michael McDonald, Zeke McDonald, Caleb McDonald, Joseph Perez and Jason Perez. Expressions of sympathy may be made to the American Cancer Society in care of Kemper-Millard-Keim Family Funeral Chapel; P.O. Box 222, Troy, MO 63379. Online condolences may be made at www.kempermillardkeimfamilychapels.com Ph.(636) 528-8221

Anna Mae Hammers, 77, of Moscow Mills, Missouri, passed away peacefully on Wednesday, March 18, 2015 at her residence. She was born on June 29, 1937 in Shannon, County, MO to Ray and Ruby (Mead) Wells. Anna was united in marriage to Leon H.... View Obituary & Service Information

The family of Anna Mae Hammers created this Life Tributes page to make it easy to share your memories.

Send flowers to the Hammers family.