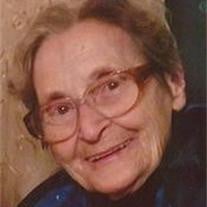 Arillian Talmadge Dykes, 87, of Silex, Missouri passed away Monday, November 11, 2013 St. Joseph West Hospital in Lake St. Louis, Missouri. She was born on October 12, 1926, a daughter of James Robert and Lucindy (Owens) Woods, in Treasure Island, Missouri. On November 2, 1946 she was united in marriage with Lecil Ellis Dykes in Haleyville, Alabama. To this union, three children were born. Arillian graduated as valedictorian from Bragg City High School in 1945. She was a homemaker and being a caretaker to her family was her top priority. The family knew that the best country cooking would be found every Sunday morning for breakfast. Arillian enjoyed living in the country, working in the yard and talking was one of her stronger points. She is survived by her children, Phyllis Harper and husband, Lloyd of Silex, Missouri; Lecil Wade of Silex, Missouri; son-in-law, Warren Hampp of Silex, Missouri; grandchildren, Lloyd Harper, Jr., Ginger Harper, Danielle Hampp, Adam Dykes and Mandy Dykes; great-grandchildren, Scott, Cody, Kimberly, Colton, John, Bailey, Madalyn, Dominic and Olivia; one sister, Roberta Wilkes; nieces, nephews and many friends. She was preceded in death by her parents, one daughter, Sandra Hampp on August 13, 2012, one grandson, Warren Hampp, Jr.; siblings, George Woods, Thelma Jones, Clara Fain, J.C. Woods, Betty Jones, Goldie Dykes, Gladys Fain and Mary Belle Luman. Friends will be received from 4:00 p.m. to 7:00 p.m. on Wednesday, November 13, 2013 at KEMPER-MARSH-MILLARD Family Funeral Home / TROY CHAPEL. Funeral services will be held at 7:00 p.m. on Wednesday, November 13, 2013 at the Chapel. Friends will also be received from 10:00 a.m. to 1:00 p.m. on Friday, November 15, 2013 at Miles Funeral Home in Winield, Alabama. Funeral services will be held at 1:00 p.m. on Friday, November 15, 2013 at the Miles Funeral Home. Burial will be in Brock Cemetery in Brilliant, Alabama. Expressions of sympathy may be made to Charity of Donor’s Choice. In care of Kemper-Marsh-Millard Funeral Home. Arrangements under the direction of Kemper-Marsh-Millard Family Funeral Home, P. O. Box 222, Troy, MO 63379 Online condolences may be made at www.kempermarshmillardfamilychapels.com Phone: 636-528-8221

The family of Arillian Dykes created this Life Tributes page to make it easy to share your memories.

Send flowers to the Dykes family.