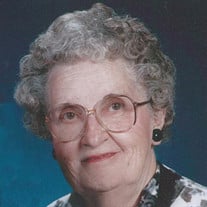 Audrey B. Kinion, 94, of Troy, Missouri passed away on Monday, September 21, 2015 at Elsberry Healthcare Center in Elsberry, Missouri. She was born on July 20, 1921 near Troy, MO the daughter of the late Murvin and Mildred (Thornhill) Boyse. She was united in marriage to Richard B. Kinion on April 12, 1941 in Hannibal, Missouri and to this union one son Larry Richard Kinion was born on January 22, 1949. Audrey graduated from Buchanan High School and attended Sanford Brown Business College in 1939. She was an active member of the Davis Christian Church and worked as a clerk and stenographer for Blair Insurance Agency. Audrey was also very active within her community, as a 4-H Club Leader, a member of the Spring Creek Club for 50 years, and the Hawk Point and Troy P.T.A. She enjoyed volunteering at the primary school when needed. When there was any spare time she liked to read, especially Lincoln County History, play cards and dominoes, dance and go to sleep to the music of the 60’s. She is survived by her one son Larry R. Kinion of Troy; one granddaughter Amy Rae Kinion-Burbage and husband Bradley of St. Louis and many friends. She was preceded in death by her parents, one brother, Donald S. Boyse and her husband, Richard K. Kinion. Friends will be received from 4:00 p.m. to 7:00 p.m. on Thursday, September 24, 2015 at KEMPER-MILLARD-KEIM Family Funeral Home / Troy Chapel. Funeral service will be held at 7:00 p.m. on Thursday, September 24, 2015 at the Chapel. Graveside service will be held at 10:00 a.m. on Friday, September 25, 2015 at the Sulphur Lick Cemetery. In lieu of flowers, expressions of sympathy may be made to the Sulphur Lick Cemetery, Troy Library or the Donor’s Choice in care of Kemper-Millard-Keim Family Funeral Chapel; P.O. Box 222, Troy, MO 63379. Online condolences may be made at www.kempermillardkeimfamilychapels.com Ph.(636) 528-8221

Audrey B. Kinion, 94, of Troy, Missouri passed away on Monday, September 21, 2015 at Elsberry Healthcare Center in Elsberry, Missouri. She was born on July 20, 1921 near Troy, MO the daughter of the late Murvin and Mildred (Thornhill) Boyse.... View Obituary & Service Information

The family of Audrey B. Kinion created this Life Tributes page to make it easy to share your memories.

Send flowers to the Kinion family.