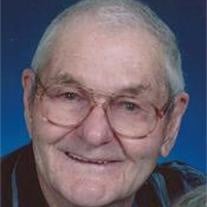 Bernard I. Keaveny, 92, of Troy passed away on Wednesday, January 30, 2013, at his daughter’s residence. He was born April 4, 1920, in Dardenne, Missouri; a son of the late Mathew I and Walburga (Weber) Keaveny. He was united in marriage on May 2, 1951, in St. Paul to Loretta Dames and she preceded him in death on January 25, 2008. To this union, four children were born: James, Alice, Tina and Lisa. Bernard was employed as a laborer in construction industry and after his retirement he went to work for Brake Rebuilders. He worked with them until he was 90 years old. He was a member of the Old Monroe Lions Club, Local 660. Bernard knew how to live and love life. He was an umpire for over twenty-five years here in the community. He was a hard worker. His children and grandchildren always had a special place in his heart. He is survived by one son, James Keaveny and wife Debbie of Troy; three daughters: Alice Crader and special friend Edward Krupinski of Troy, Tina Vance and husband Jerry of Winfield and Lisa Adler and husband Aaron of Troy; 13 grandchildren and 40 great-grandchildren. He was preceded in death by his parents, wife, 2 grandchildren: Michael and Lindsey and one great-grandchild, Blake. Serving as Pallbearers are: Ronnie Mergenthal, Randy Mergenthal, Kevin Keaveny, Josh Vance, Jake Vance and Jeremy Adler. Friends will be received from 4:00 p.m. to 8:00 p.m. on Thursday, January 31, 2013, at Kemper-Marsh-Millard Funeral Home / Troy Chapel. The Old Monroe Lions Club will conduct a Rose Ceremony on Thursday. A Mass of Christian Burial will be held at 10:00 am on Friday, February 1, 2013 at Sacred Heart Catholic Church with Fr. Thomas Wissler officiating. Interment will be held in St. Charles Memorial Gardens. Expressions of sympathy may be made to the charity of your choice in care of Kemper-Marsh-Millard Family Funeral Chapel; PO Box 222, Troy, MO 63379. (636) 528-8221. Online condolences may be made at www.kempermarshmillardfamilychapels.com

Bernard I. Keaveny, 92, of Troy passed away on Wednesday, January 30, 2013, at his daughter’s residence. He was born April 4, 1920, in Dardenne, Missouri; a son of the late Mathew I and Walburga (Weber) Keaveny. He was united in marriage on... View Obituary & Service Information

The family of Bernard Keaveny created this Life Tributes page to make it easy to share your memories.

Bernard I. Keaveny, 92, of Troy passed away on Wednesday, January...

Send flowers to the Keaveny family.