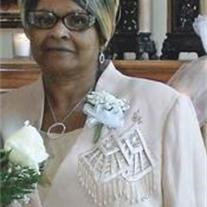 Bernice Lavon Cockrell, 59, of Troy, Missouri, passed away on Sunday, March 4, 2012 at the Lincoln County Medical Center. She was born on July 22, 1952 in Troy, Missouri, a daughter of the late Constance Ray-Clark. She was united in marriage to Charles Randolph Cockrell on May 5, 1970 in Troy, Missouri. He preceded her in death on March 24, 2005. She graduated from Troy Buchanan High School. She was employed for many years at Harper and Row (Harcourt). She was a very dedicated member of the Pleasant Valley Baptist Church, where she would sing in the choir. Bernice enjoyed listening to gospel music and watching Judge Mathis. She enjoyed spending time with her family, especially her grandchildren and reminiscing memories of her husband, Charles. She will be deeply missed by those who knew and loved her. She is survived by one daughter: Felicia Walraven and husband Richard of Bowling Green, Missouri; one son: Terrance Cockrell and wife Diane of Troy, Missouri; one brother: Robert Ray and Cheryl Mozee of Hawk Point, Missouri; two sisters: Betty Cockrell and husband Larry of St. Charles, Missouri and Cassandra Hawkins and Tony Williams of St. Louis, Missouri; six grandchildren: Josh Cockrell, Taneshia Cockrell, Justin Cockrell, Breonna Cockrell, Kaitlyn Cockrell and Trenton Cockrell; special friend Mae Collins, brother-in-laws, sister-in-laws, one uncle, cousins, nieces, nephews and many friends. She was preceded in death by her mother, her husband and one brother, David Ray. Friends will be received from 4:00 p.m. to 8:00 p.m. on Friday, March 9, 2012 at KEMPER-MARSH-MILLARD Family Funeral Home / Troy Chapel. Funeral services will be held at 11:00 a.m. on Saturday, March 10, 2012 at the Pleasant Valley Baptist Church in Troy, Missouri. Officiating the service will be Reverend Gilcrease. Serving as casket bearers are Troy Cockrell, Thomas Mathews, Charles Price, Tony Williams, David Ray, Jr. and Daryl Ray. Honorary casket bearers, Carl Ray, Tom Shelton and Mike Mathews. Interment will be held at Troy City Cemetery. Expressions of sympathy may be made to the American Heart Association’s or American Diabetes Association’s. In care of Kemper- Marsh-Millard Family Funeral Chapel; P. O. Box 222, Troy MO, 63379. Online condolences may be made at www.millardfamilychapels.com Ph.(636) 528-8221

Bernice Lavon Cockrell, 59, of Troy, Missouri, passed away on Sunday, March 4, 2012 at the Lincoln County Medical Center. She was born on July 22, 1952 in Troy, Missouri, a daughter of the late Constance Ray-Clark. She was united in marriage... View Obituary & Service Information

The family of Bernice Cockrell created this Life Tributes page to make it easy to share your memories.

Bernice Lavon Cockrell, 59, of Troy, Missouri, passed away on...

Send flowers to the Cockrell family.