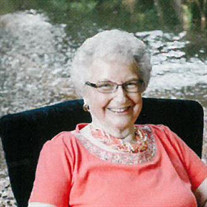 Betty Cox Hunter, 89 of Troy, Missouri went home to the Lord on Sunday, June 24, 2018 at her residence. Betty was the only daughter of Homer L. and Laura Bell (Creech) Cox was born June 24, 1929 and grew up at Old Alexandria. Her family attended the Methodist Church at Old Alexandria. Even in recent years Betty was at the church cemetery volunteering in the collection of the funds to support the mowing of the grounds. Betty later moved her membership to St. Stephen United Methodist Church in Troy where you could find her working in various capacities to support her church. She attended Buchanan High School and was chosen Homecoming Queen in 1946. In her working career, she worked her way up through the ranks at the local Gossard Garment Factory, to become Plant Manager for 35 years. This factory made high quality ladies lingerie sold in many upscale clothing stores. To her credit, she and a few of her fellow assistants from the factory formed a bowling team. They became an exceptional team and played in tournaments near and far. After her retirement from the garment factory, she worked for the family business Cox & Cohea Chevrolet-Buick, in Wentzville, MO for four years. She also served as the Assistant Lincoln County Clerk for four years. Betty was recognized as an outstanding woman for her many achievements. She was a champion of firsts for the women of Troy. Among these, she was the first woman President of the Troy Chamber of Commerce in 1979; first female alderman of the City of Troy and the first woman board member for the Old Alexandria Cemetery. She has been Troy Chamber of Commerce Woman of the Year in 1969, received the Troy Chamber of Commerce President’s Award and Chamber of Commerce Special Assistant to President’s Award. The Betty Hunter Legacy Award, announced by the Chamber of Commerce, was established and given by President Kathryn Ragsdale in 2014. She also received the Community Betterment Achievement Award and Honor of Merit. Betty established the Avenue of Flags where flags are flown as memorials in the Troy City Cemetery on certain holidays. She managed the program for 25 years. In her personal life, in 1964, Betty Cox became the wife of Julius “Dee” Hunter, a local building contractor and businessman. Dee was a well-respected man of the highest integrity. Shortly after their marriage, he built the beautiful brick home where she has continued to live since. Dee passed away in 1991. A few years after Dee’s passing, she met a widowed contractor, Charles Worsley, whose personal company she enjoyed until his untimely death. His children adored her and have kept in contact with her since that time. It would be impossible to count how many dinners Betty cooked through the years for the family and friends. She loved entertaining and the spirit of the friendship. She used to prepare Sunday dinner, almost every week, for her brother Bob. They enjoyed a special family bond. Her nieces, her late brother Bob’s girls: Dixie, Joni, Tammie and Tracey and her niece Dee Ann Aydelott, are very special to her. She was always there for them, if they needed anything. She loved their children and grandchildren as well. Her close friends and family will long remember her as “Everybody’s Aunt Betty.” Betty was preceded in death by her husband, J. Dee Hunter, her brother, Robert Cox, sister-in-law, Dottie Cox and nephew, Kerry Cox. Also her good friend, Charles Worsley. She is survived by several cousins and innumerable friends. The surviving close family members include her five nieces and one nephews, namely; Dixie Cox of Wentzville, MO; Joni Cox Nichoalds and husband Mike of Foristell, MO, Tammie Cox and husband Tim Winegardner of Lincoln County, MO, Tracey Cox Combs and husband Ted of Wright City, MO, Dee Ann Beckman Aydelott of Troy, MO and Hunter Beckman and wife Judy of Ora Valley, AZ; two great nieces: Lauren and Lindsey; one great nephew, Shawn; two great-great nephews: Nolan and Lane and one great-great niece, Savannah. Friends will be received from 3:00 p.m. to 8:00 p.m. on Friday, June 29, 2018 at KEMPER-MILLARD-KEIM Family Funeral Chapel located at 351 Monroe Street Troy, MO 63379. A funeral service will be held at 11:00 a.m. on Saturday, June 30, 2018 at the St. Stephen United Methodist Church located at 101 St. Stephen Lane Troy, MO 63379. In lieu of flowers expressions of sympathy may be made to the St. Stephen United Methodist Church or Lincoln County Nursing and Rehab, in care of KEMPER-MILLARD-KEIM Family Funeral Chapel, P.O. Box 222 Troy, MO 63379. Arrangements are under the direction of KEMPER-MILLARD-KEIM Family Funeral Chapel; 351 Monroe Street Troy, MO 63379. Online condolences may be made at www.kempermillardkeimfamilyfuneralchapel.com Phone 636-528-8221

Betty Cox Hunter, 89 of Troy, Missouri went home to the Lord on Sunday, June 24, 2018 at her residence. Betty was the only daughter of Homer L. and Laura Bell (Creech) Cox was born June 24, 1929 and grew up at Old Alexandria. Her family attended... View Obituary & Service Information

The family of Betty Cox Hunter created this Life Tributes page to make it easy to share your memories.