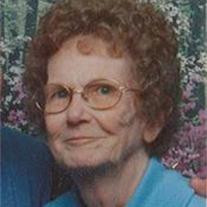 Betty Ann Morrison, 74, of Hawk Point, Missouri passed away on Saturday, February 16, 2013. She was born on April 22, 1938 in Wewoka, Oklahoma; a daughter of the late George A. and Daisy (Brown) Pierce. Betty was married on September 22, 1956 in Shawnee, Oklahoma to Emmitt Morrison. She preceded her in death on October 12, 2008. Betty graduated from Shawnee High School in 1956. She was a member of the Hawk Point Baptist Church. Betty was a homemaker and enjoyed sewing, working jigsaw puzzles, crossword puzzles, reading and mowing grass for many businesses and friends in Hawk Point. She is survived by her daughter, Treva Morrison of Hawk Point; two grandchildren: Casey Stuck of Hawk Point Troy and Tabatha Ann Morrison of Hawk Point; one great-grandchild, Blaine Galvin; two nieces, JoAnn Kaskaska and Naomi Gray; three nephews, Mike Tate, Ricky Pate and John Grass. She was preceded in death by her husband, two sisters, Doris Tate and Faye Pate, one son Terry Morrison and nephew Wendell Kaskaska. Friends will be received from 4:00 p.m. to 8:00 p.m. on Wednesday, February 20, 2013 at KEMPER-MARSH-MILLARD Family Funeral Home / Hawk Point Chapel. Funeral services will be held at 1:00 p.m. on Thursday, February 21, 2013 at the Kemper-Marsh-Millard Family Funeral Home/ Hawk Point Chapel. Interment will be held in Hawk Point City Cemetery. Expressions of sympathy may be made to the Lupus Foundation. Arrangements under the direction of Kemper-Marsh-Millard Family Funeral Chapel; 41 Farm Lane, Hawk Point, MO. Online condolences may be made at www.millardfamilychapels.com Ph.(636) 338-4375

The family of Betty Morrison created this Life Tributes page to make it easy to share your memories.

Betty Ann Morrison, 74, of Hawk Point, Missouri passed away on...

Send flowers to the Morrison family.