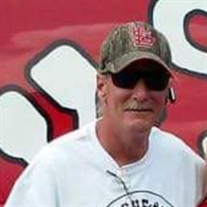 Bruce Kevin Oglesby, 60, of Troy, Missouri, passed away on Wednesday, November 17, 2021 at SSM St. Joseph Hospital West in Lake Saint Louis, Missouri. Bruce was born on April 9, 1961 in St. Louis, Missouri, the son of Richard and Rita (Summers) Oglesby. He was united in marriage to Ginny McMahon on July 21. 1996 in St. Louis, Missouri. Bruce retired from Fielder Electric as an electrician. In his earlier years he enjoyed deer hunting. He was an amazing cook, who loved to BBQ. Bruce liked playing video games. He loved spending time with his family and friends. He is survived by his wife, Ginny Oglesby of St. Louis, MO; three sons and two daughters: Kevin, Jessica, Jeffrey, LaTasha and Raymond; three brothers and two sisters: Denny, Pam, Sharon, Mark and Scott; ten grandchildren, aunts, uncles, cousins and friends. He was preceded in death by his parents. Services will be held private. Expressions of sympathy may be made To The Family of Bruce Kevin Oglesby in care of Kemper-Keim Family Funeral Chapel P.O. Box 222 Troy, MO 63379. Arrangements are under the direction of Kemper-Keim Family Funeral Chapel; 351 Monroe Street, Troy, Missouri 63379. Online condolences may be made at www.kemperkeimfamilyfuneralchapel.com Phone 636-528-8221

The family of Bruce Kevin Oglesby created this Life Tributes page to make it easy to share your memories.

Bruce Kevin Oglesby, 60, of Troy, Missouri, passed away on Wednesday,...

Send flowers to the Oglesby family.