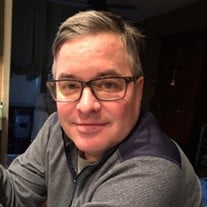 Bryan Joseph Margedant, 40, of Hawk Point, Missouri, passed away on Tuesday, January 7, 2020 in Franklin, Tennessee. He was born on April 28, 1979 in St. Charles, Missouri and the son of Tim Margedant and Doris (Matustik) Margedant. Bryan graduated from Troy Buchanan High School in 1997. He worked for Southwest Airlines for over 22 years, starting as a ramp worker and later a flight attendant. Bryan worked for the family owned business, Fast Trip/Texaco in Hawk Point. In his earlier years he was a lifeguard at the Warrenton Pool, volunteered many hours at the Hawk Point VFW, Ronald Mc Donald House and the Hawk Point Lions Club. He served as Hawk Point Alderman. Bryan enjoyed fishing on the river and hunting with his twin brother Chris. He was a great golfer and was an avid St. Louis Cardinals Baseball Fan. Bryan loved the time he spent with his family and especially his friends, going to dinner and social hour. His gentle smile and laugh will be missed. He is survived by his significant other, Jennifer Gibson of Franklin, TN; his mother, Doris Margedant of Warrenton, MO; his father, Tim Margedant of Warrenton, MO; one twin brother, Chris Margedant and wife Tricia of Hawk Point; one sister, Lisa Margedant and significant other, Josh Busekrus of Warrenton; three nieces and one nephew: Carly Margedant, Cadyn Margedant, Lillian Jean Margedant and Bradley Margedant-Busekrus; aunts and uncle: Carol Peper and Frank of Hawk Point, MO and Janet Margedant of Springfield, IL; cousins and many, many friends. He was preceded in death by his grandparents: Richard “Dick” and Jean Margedant and John and Sarah Matustik; one uncle, Tom Margedant. Family and friends will be received from 2:00 p.m. to 8:00 p.m. on Monday, January 13, 2020 at the KEMPER-MILLARD-KEIM Family Funeral Chapel located at 41 Farm Lane Hawk Point, MO 63349. Funeral service will be held at 1:00 p.m. on Tuesday, January 14, 2019 at KEMPER-MILLARD-KEIM Family Funeral Chapel located at 41 Farm Lane Hawk Point, MO 63349. Interment will be held at Hawk Point City Cemetery. In lieu of flowers, expressions of sympathy may be made to Shriner Hospital for Children’s in care of Kemper-Millard-Keim Family Funeral Chapel, P.O. Box 222 Troy, MO 63379. Arrangements are under the direction of Kemper-Millard-Keim Family Funeral Chapel; 41 Farm Lane Hawk Point, MO 63349. Online condolences may be made at www.kempermillardkeimfamilyfuneralchapel.com Phone 636-338-4375.

Bryan Joseph Margedant, 40, of Hawk Point, Missouri, passed away on Tuesday, January 7, 2020 in Franklin, Tennessee. He was born on April 28, 1979 in St. Charles, Missouri and the son of Tim Margedant and Doris (Matustik) Margedant. Bryan... View Obituary & Service Information

The family of Bryan Joseph Margedant created this Life Tributes page to make it easy to share your memories.

Send flowers to the Margedant family.