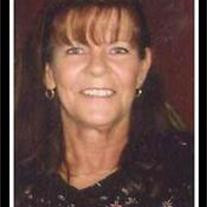 Candis Sue Jordan-Mense, 53, of Troy, Missouri, passed away on February 5, 2012 at Barnes Jewish Hospital in St. Peters, Missouri. She was born May 22, 1958 in St. Louis, Missouri a daughter of Woodrow “Woody” and Martha Garner. Candis graduated from Troy Buchan High in 1977. She was employed at Nike Ihm Inc. in Cave Springs, Missouri, for 15 years and then later employed at Alpla Inc. in O’Fallon, Missouri. Candis loved going on float trips, playing pool and having a good time, with her family and friends. She knew how to enjoy life, very optimistic and outgoing. Candis was a very caring and compassionate person, who had a real love for her family, especially her children. She will be deeply missed by those who knew and loved her. She is survived by her children: Amber Mense and fiancé, Jason Foust of St. Charles, Missouri and Justin Mense of Troy, Missouri; mother, Martha Garner of Hawk Point, Missouri; siblings: Jeanie Nichols of St. Clair, Missouri, and Richard Garner and fiancé, Tracy Freant of Hawk Point, Missouri; aunt, Linda Heady; uncle, Charles Nichols; great-aunt, Opal Owens; great-uncle, Jay Harris; several nieces, nephews and many friends. She was preceded in death by her father, Woody Garner on July 31, 2011, grandparents and uncle, Steven Heady on July 10, 2011. Friends will be received from 4:00 p.m. to 8:00 p.m. on Wednesday, February 8, 2012 at KEMPER-MARSH-MILLARD Family Funeral Home / TROY CHAPEL. Funeral services will be held at 11:00 a.m. on Thursday, February 9, 2012 at KEMPER-MARSH-MILLARD Family Funeral Home / TROY CHAPEL. Officiating the service will be Rev. Jack Harris. Interment will be held at Hawk Point City Cemetery in Hawk Point. In lieu of flowers expressions of sympathy may be made to The Family Of Candis Mense. Arrangements under the direction of Kemper-Marsh-Millard Family Funeral Home, P. O. Box 222, Troy, MO 63379 Online condolences may be made at www.millardfamilychapels.com Phone: 636-528-8221

Candis Sue Jordan-Mense, 53, of Troy, Missouri, passed away on February 5, 2012 at Barnes Jewish Hospital in St. Peters, Missouri. She was born May 22, 1958 in St. Louis, Missouri a daughter of Woodrow “Woody” and Martha Garner.... View Obituary & Service Information

The family of Candis Jordan-Mense created this Life Tributes page to make it easy to share your memories.

Candis Sue Jordan-Mense, 53, of Troy, Missouri, passed away on...

Send flowers to the Jordan-Mense family.