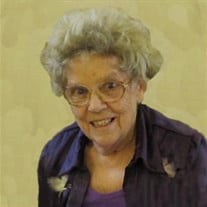 Carol A. Fidler, 82, of Troy, passed away on Friday, February 19, 2016 at her residence. She was born on February 5, 1934 in Jamaica, New York, the daughter of the late Richard Casement and Margaret (Tobias) Casement-Schwenk. Carol was united in marriage to Thomas Langion, who preceded her in death and she later married Brunson Fidler on January 1, 1986 in Troy, Missouri. Carol was raised in New York and resided in Syossett, New York until moving to Troy, Missouri in 1985. She was a homemaker who loved spending time in her garden and canning the produce. She raised chickens and Great Pyrenees dogs to help guard the goats and her flock of sheep. Carol would utilize the sheep’s wool for spinning to make clothing, bears and various other crafts. She enjoyed spending time in her craft room doing those various projects and embroidering or sewing. She is survived by her loving husband, Brunson Fidler of Troy; children: Thomas Langion, Jr. and wife Geraldine of Citra, FL, Jeanne Judge and husband Patrick of Mascoutah, IL and Timothy Langion of Babylon, NY; one sister, Ruth Stortz of FL; grandchildren: Teresa Langion Rice, Cynthia Judge Baird and Patrick Judge, Jr.; great-grandchildren: Joey, Alex, Issac, Luke, Taylor, Zoey and Heidi and many friends. She was preceded in death by her parents, her first husband, and one sister, Margaret Horning. Services will be held private for the family. In lieu of flowers expressions of sympathy may be made to the C.O.P.D. Foundation or American Heart Association, in care of Kemper-Millard-Keim Family Funeral Chapels, P.O. Box 222 Troy, MO 63379. Online condolences may be made at www.kempermillardkeimfamilychapels.com Phone 636-528-8221

Carol A. Fidler, 82, of Troy, passed away on Friday, February 19, 2016 at her residence. She was born on February 5, 1934 in Jamaica, New York, the daughter of the late Richard Casement and Margaret (Tobias) Casement-Schwenk. Carol was united... View Obituary & Service Information

The family of Carol A. Fidler created this Life Tributes page to make it easy to share your memories.

Send flowers to the Fidler family.