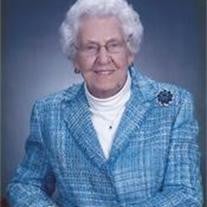 Carroll Hedeman Ponder Watts, 96 of Troy, Fortified with the Sacraments of the Holy Mother Church, passed away Saturday, July 20, 2013 at her residence. She was born on September 10, 1916 in St. Louis, Missouri, a daughter of the late Charles Carroll and Ella Christine (Bockhorst) Ponder the family then moved to Troy, Missouri. She graduated from Buchanan High School in Troy and on April 28, 1935, she was united in marriage to LeRoy Watts at the Sacred Heart Catholic Church. To this union three children were born, Robert, Ronald and Julie. Carroll was known to her grandchildren as grandmother and great-grandchildren as “G.G.”, she was an enthusiastic and supportive influence. Carroll owned and operated Carroll’s Flowers in Troy for 30 years. She visited all 50 states and seven foreign countries. She was a charter member of the Troy Business and Professional Women and a member of the Evangeline Club. Carroll was a 90 year member of the Sacred Heart Parish in Troy and a member of the St. Ann’s Sodality. Carroll enjoyed golf, swimming, horseback riding and was an enthusiastic bridge player. She was a member of Friends of Lincoln County Memorial Hospital and Lincoln County Historical Society. She received the Historical Society Award. She is survived by her loving children, Julie Hoffmann and husband, Gary of Troy, Missouri, Robert “Bob” Watts and Sandra Freeland of Carlisle, Iowa and Ronald “Ron” Watts and wife, Jan of Wentzville, Missouri; eleven grandchildren, twenty-one great-grandchildren and two great-great-grandchildren. Carroll was preceded in death by her parents, husband, LeRoy on November 14, 2002, brother, J.C., four grandchildren and two daughter-in-laws. Friends will be received from 2:00 p.m. to 8:00 p.m. on Sunday, July 28, 2013 at KEMPER-MARSH-MILLARD Family Funeral Home / Troy Chapel. A Mass of Christian Burial will be held at 10:00 a.m. on Monday, July 29, 2013 at Sacred Heart Catholic Church in Troy, Missouri. Inurnment will be held at the Sacred Heart Catholic Cemetery at a later date. Expressions of sympathy may be made to the St. Vincent DePaul Society, Sacred Heart Building Fund or Charity of Donor’s Choice. In care of Kemper- Marsh-Millard Family Funeral Chapel; P. O. Box 222, Troy MO, 63379. Online condolences may be made at www.kempermarshmillardfamilychapels.com Ph.(636) 528-8221

Carroll Hedeman Ponder Watts, 96 of Troy, Fortified with the Sacraments of the Holy Mother Church, passed away Saturday, July 20, 2013 at her residence. She was born on September 10, 1916 in St. Louis, Missouri, a daughter of the late Charles... View Obituary & Service Information

The family of Carroll Watts created this Life Tributes page to make it easy to share your memories.

Carroll Hedeman Ponder Watts, 96 of Troy, Fortified with the...

Send flowers to the Watts family.