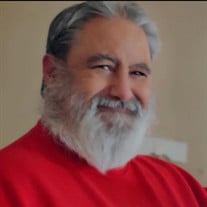 Cecil Edward Worrell, 57, of Troy, Missouri, passed away on Thursday, October 14, 2021 at Mercy Hospital in St. Louis, Missouri. Cecil was born on April 11, 1964 in Everett, Washington, the son of Francisco and Florence Ann (Boyer) Worrell. He was united in marriage to Cathryn Ann Swendener on July 21, 2001 in Monroe, Washington. Cecil graduated from Mariner High School in 1982 and served his country in the United States Navy from 1982 until he was honorably discharged in 1995. Cecil continued his education with an associates degree in Applied Science Computer Aided Design Technology. He worked for Boeing and Army Corps of Engineer and most recently as a drafter with Premier Design. Cecil was an amazing cook, who was known for his apple pies, lasagna and teriyaki chicken wings. He liked working on his 1972 Chevy truck and tinkering around the house. Cecil loved spending time with his family, which was very important to him and Cathy as they adopted their four children. He enjoyed sharing Navy stories with family and friends. He was a likeable person, with a larger than life personality. He is survived by his loving wife of 20 years, Cathy Worrell of Troy, MO; sons and daughters: Michael Worrell, Camie Worrell, Elijah Worrell, Ceilie Worrell, Kristin Cassels and Jacob Worrell; one step-son, Jared Look; two brothers and one sister: Rick Worrell, Barbara Rodriguez and Bernie Worrell; one grandson, Hayden Cassels, nieces, nephews, cousins and friends. He was preceded in death by his parents and one sister, Valecia Snyder. Services will be held at a later date. Expressions of sympathy may be made Loved Without Boundaries in care of Kemper-Keim Family Funeral Chapel P.O. Box 222 Troy, MO 63379. Arrangements are under the direction of Kemper-Keim Family Funeral Chapel; 351 Monroe Street, Troy, Missouri 63379. Online condolences may be made at www.kemperkeimfamilyfuneralchapel.com Phone 636-528-8221

The family of Cecil Edward Worrell created this Life Tributes page to make it easy to share your memories.

Cecil Edward Worrell, 57, of Troy, Missouri, passed away on Thursday,...

Send flowers to the Worrell family.