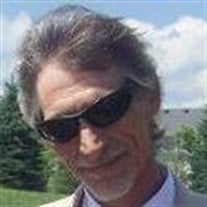 Charles “Charlie” Theodore Mershon, 60, of Moscow Mills, Missouri, passed away on Monday, February 22, 2016 surrounded by his family at his residence. He was born on May 13, 1955 in Troy, MO a son of the late John Robert and Blanche Elizabeth (Callaway) Mershon. Charlie met the love of his life Merry Livingston 25 years ago and they have shared many wonderful years together. Charlie attended the Troy Buchanan High School, he entered the U.S. Army on September 15, 1972 in St. Louis, MO. While serving his country he earned a National Defense Service Medal, a Marksman M16 and was honorably discharged on September 5, 1975. He worked as a Mechanic in Troy for over 40 years and was recently employed by Greg’s Automotive. Charlie still continued to work even after he was diagnosed with cancer. As Charlie was a truly dedicated employee the owners of Greg’s, Kelly and Shawn Evans, continued to support Charlie and his family through his illness. Not only did they hold a fundraiser but they provided medical insurance coverage when he was no longer able to work. Charlie enjoyed tinkering on cars, attending car shows, dirt track races and racing RC cars. He loved listening to music and spending time with his family, especially on the 4th of July. He is survived by the love of his life, Merry Livingston of Moscow Mills; four children he adopted with love: Nick Howard and wife Danielle of Troy, Derek Howard and wife Tiffany of Troy, Chris Cichon and wife Rachel of Troy and Stephanie Hamilton and husband Steve of Moscow Mills; siblings: Alberta Twellmann of Moscow Mills, Martha Taylor (Lux) of Warrenton, Linda Hoffman (Steve) of Phoenix, AZ, Gail Hopkins of NC, Eileen Nett (Jim) of Perry, Thomas Mershon (Sandy) of Troy and Richard Mershon of Moscow Mills; grandchildren: Stella Howard, Taylor and Paisley Howard, Cruz, Ryder and Chase Cichon and Ayden, Kolby, Kenlee; nieces, nephews, cousins and many friends. He was preceded in death by his mother, father and two brothers-in-law: Ronald “Curly” Twellmann and Bob Hopkins. Friends will be received from 4:00 p.m. to 7:00 p.m. on Friday, February 26, 2016 at the KEMPER-MILLARD-KEIM FAMILY FUNERAL HOME/TROY CHAPEL located at 351 Monroe Street Troy, MO 63379. A celebration of life will be held at 7:00 p.m. at the Chapel. Expressions of sympathy may be made to the Relay For Life of Lincoln County, team Charlie’s Angels, in care of Kemper-Millard-Keim Family Funeral Chapels, P.O. Box 222 Troy, MO 63379. Arrangements are under the direction of Kemper-Millard-Keim Family Funeral Chapel; 351 Monroe Street, Troy, Missouri 63379. Online condolences may be made at www.kempermillardkeimfamilychapels.com Phone 636-528-8221

The family of Charles "Charlie" Theodore Mershon created this Life Tributes page to make it easy to share your memories.

Send flowers to the Mershon family.