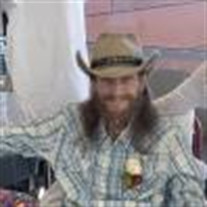 Charles “Chuck” Fredrick Lockhart III, 62, of Troy, Missouri passed away on Saturday, March 23, 2019 at 8:08 pm at SSM Health St. Joseph Hospital in St. Charles, Missouri. Charles was born on September 25, 1956 in St. Louis, Missouri a son of Charles Fredrick Lockhart II and Patricia (Bocklitz) Lockhart Klein. He was united in marriage to the love of his life Marjorie Moyer on March 15, 2019 in Lake Saint Louis, Missouri. Chuck attended O’Fallon High School and spent his entire life as a Carpenter. He owned and operated Lockhome Kennels where he trained and raised German Shepherds. Chuck was a member of the American Kennel Club and the National Rifle Association. He enjoyed collecting guns. Chuck was a musician who loved the blues and enjoyed all other kinds of music. He loved fishing, spending time outdoors and being around his animals. Chuck was a calm, gentle man, who was always giving to others. He is survived by his loving wife Marjorie Lockhart of Troy, MO; his mother, Patricia Klien of Montgomery, MO; bonus children: Michael Baker of Troy, MO, Randy Baker of Troy, MO, Danny and Lindsey Baker and their children: Liam and Huxley of O’Fallon, MO; mother-in-law, Phyllis Martinez of Lake Havasu City, AZ; one sister-in-law, Linda and Keith Toy and their children, Brian Toy of Lake Havasu City, AZ; nephews: Aubrey Carillo and Cory Carillo and many, many friends. He was preceded in death by his grandparents: John and Freda Bocklitz and one aunt Jean Bocklitz. Family and friends will be received from 4:00 p.m. to 7:00 p.m. on Friday, March 29, 2019 at KEMPER-MILLARD-KEIM Family Funeral Chapel located at 351 Monroe Street Troy, MO 63379. Funeral service will be held at 7:00 p.m. on Friday, March 29, 2019 at KEMPER-MLLARD-KEIM Family Funeral Chapel in Troy, MO. Graveside service will be held at 10:30 a.m. on Saturday, March 30, 2019 at the Asbury Cemetery located at 2241 State Hwy W, Foley, MO 63347. In lieu of flowers expressions of sympathy may be made to the SSM Cancer Care Center in Lake Saint Louis in care of Kemper-Millard-Keim Family Funeral Chapel P.O. Box 222 Troy, MO 63379. Arrangements are under the direction of Kemper-Millard-Keim Family Funeral Chapel; 351 Monroe Street, Troy, Missouri 63379. Online condolences may be made at www.kempermillardkeimfamilyfuneralchapel.com Phone 636-528-8221

The family of Charles "Chuck" Fredrick Lockhart III created this Life Tributes page to make it easy to share your memories.

Send flowers to the Lockhart family.