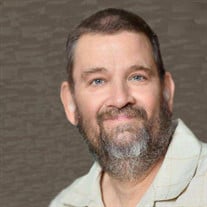 Charles “Chuck” Smith, 62, of Troy, Missouri, passed away on April 6, 2020 at his residence in Troy, Missouri. Chuck was born on April 4, 1958 in St. Louis, Missouri, a son of the late George Alvin Smith and Marjorie Speckhals. He was raised by Wilber and Delphine Reeder. Chuck was united in marriage to Angela Shockley on November 28, 1992 Chuck graduated from Clopton High School in 1977. He worked at Mercy Hospital Lincoln where he retired in 2012. Chuck was an active member of the New Fellowship Baptist Church in Troy and could sing, especially when it came to Elvis songs. He was a good Christian man who loved to be around people. Chuck always had a joke to tell and a smile on his face. He enjoyed fishing, cheering on the St. Louis Cardinals and the Blues Hockey. Chuck was loved by many and will be deeply missed. He is survived by his loving wife, Angela Smith of Troy, MO; one son, Kalon R. Smith if Vandalia, MO; one brother, George Smith of KY; mother-in-law, Juanita Shockley of Warrenton, MO; brothers-in-law and sisters-in-law: Jim Shockley and wife Alice of Jefferson City, MO, Frank Shockley and wife Kim of St. Peters, MO, Helen McDonnell and husband Peter of McGrgor, MN, Robin Polston of Warrenton, MO, Jeanne Crockett of St. Peters, MO and Sherri Kleinheider and husband Deron of Arnold, MO, many nieces and nephews, including: Amanda Reeder, Jason Reeder and Jessica Nguyen (Solomon); cousins and many friends. He was preceded in death by his parents, foster parents, Wilber and Delphine Reeder and father-in-law, James Shockley. Services will be held at a later date. Expressions of sympathy may be made to Angela Smith in care of Kemper-Millard-Keim Family Funeral Chapel P.O. Box 222 Troy, MO 63379. Arrangements are under the direction of Kemper-Millard-Keim Family Funeral Chapel; 351 Monroe Street, Troy, Missouri 63379. Online condolences may be made at www.kempermillardkeimfamilyfuneralchapel.com Phone 636-528-8221

The family of Charles "Chuck" Smith created this Life Tributes page to make it easy to share your memories.

Send flowers to the Smith family.