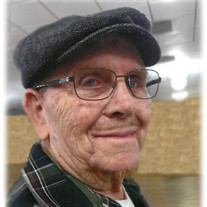 Charles Dorian Colbert, 79, of Troy, Missouri, passed away peacefully on Tuesday, February 5, 2019 at his residence. He was born on August 3, 1939 in Olney, Missouri and the son of the late Efton and Viola May (Collins) Colbert. He was united in marriage to Nancy Melton on September 3, 1997 in Troy, Missouri. Charles graduated from Buchanan High in 1957 and served his country in the United States Army from 1957 until he was honorably discharged in 1958. He owned and operated Lincoln Auto Body in Troy from 1966 until he sold the shop in 1987. After selling the auto body shop he then farmed for himself for over 12 years. Charles was always tinkering on a project, working on vehicles or mowing the grass. He enjoyed watching Judge Judy or RFD T.V. Charles was a person you could go to for advice or to hear a great story. His joking personality and mischievous smile will be greatly missed. He is survived by his loving wife, Nancy Colbert of Troy, MO; one son, Dennis Colbert and wife Nettie of Eolia, MO; one daughter, Darla Tidwell and fiancé Denby Brazell of LaPorte, TX; three bonus children: Darren Kimbrel and wife Cindi of Ashland, Dwayne Kimbrel and wife Sarah of Ashland and Dana Kimbrel and husband Mike of Fulton; two sisters: Bonnie Bolte of Hawk Point and Susan Colbert of Troy; fifteen grandchildren: Kelly, Ryan (Natalie), Jared (Shanon), Justin (Baylee), Amber, Erin (William) Zachary, Kelsi, Allysia (Will), Erik (Keaira), Dakota (Cheyenne), Olivia, Liam, Payton and Owen; thirteen great-grandchildren; nieces, nephews, cousins and many friends. He was preceded in death by his parents, one son, Dale Colbert, one sister, Joyce Hawkins and one brother-in-law, Ray Bolte. Family and friends will be received from 11:00 a.m. to 3:00 p.m. on Friday, February 8, 2019 at the KEMPER-MILLARD-KEIM Family Funeral Chapel located at 41 Farm Lane Hawk Point, MO 63349. Funeral service will be held at 3:00 p.m. on Friday, February 8, 2019 at KEMPER-MILLARD-KEIM Family Funeral Chapel located at 41 Farm Lane Hawk Point, MO 63349. Interment will be held at Hawk Point City Cemetery. In lieu of flowers, expressions of sympathy may be made to American Cancer Society or American Heart Association in care of Kemper-Millard-Keim Family Funeral Chapel, P.O. Box 222 Troy, MO 63379. Arrangements are under the direction of Kemper-Millard-Keim Family Funeral Chapel; 41 Farm Lane Hawk Point, MO 63349. Online condolences may be made at www.kempermillardkeimfamilyfuneralchapel.com Phone 636-338-4375.

Charles Dorian Colbert, 79, of Troy, Missouri, passed away peacefully on Tuesday, February 5, 2019 at his residence. He was born on August 3, 1939 in Olney, Missouri and the son of the late Efton and Viola May (Collins) Colbert. He was united... View Obituary & Service Information

The family of Charles Dorian Colbert created this Life Tributes page to make it easy to share your memories.

Send flowers to the Colbert family.