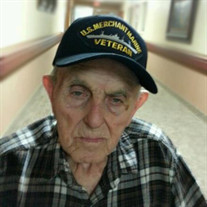 Charles “Randal” Duff, 93 of Hawk Point, Missouri, passed away on Sunday, April 1, 2018 at Troy Manor in Troy, Missouri. He was born on May 11, 1924 in Corso, Missouri and the son of the late John R. and Ella M. (McDonald) Duff. Randal graduated from Hawk Point High School and then served his country in the United States Coast Guard from December 7, 1941 until December 31, 1946 when he was honorably discharged. He worked as a Truck Driver for Majestic Trucking and Hunt Concrete until retirement, after retirement he owned and operated his own log truck. He was a member of the Hawk Point VFW Post 7560 and American Legion Post in Troy. Randal enjoyed hunting, and fishing. He was known for his fresh produce that he grew in his garden and took great pride in sharing with many friends. He is survived by his one brother, Clayton Duff and wife Barb of Hawk Point; two sisters: Barb Mudd of Troy and Judy Royster and husband Joe of Silex; many nieces and nephews and one very close niece, Diane Ingram of Hawk Point. He was preceded in death by his parents, seven brothers and sisters: Dorothy Kelsick, Rosie Canady, Pearl Davis, George Duff, Ella Margret Colbert, John Duff, and Larry Duff and one special great niece, Gail Duff. Friends will be received from 5:00 p.m. to 8:00 p.m. on Wednesday, April 4, 2018 at KEMPER-MILLARD-KEIM Family Funeral Chapel located at 41 Farm Lane Hawk Point, MO 63349. Funeral service will be held at 11:00 a.m. on Thursday, April 5, 2018 at KEMPER-MILLARD-KEIM Family Funeral Chapel located at 41 Farm Lane Hawk Point, MO 63349. In lieu of flowers, expressions of sympathy may be made to Wounded Warriors in care of Kemper-Millard-Keim Family Funeral Chapel, P.O. Box 222 Troy, MO 63379. Arrangements are under the direction of Kemper-Millard-Keim Family Funeral Chapel; 41 Farm Lane Hawk Point, Missouri 63349. Online condolences may be made at www.kempermillardkeimfamilyfuneralchapel.com Phone 636-338-4375

The family of Charles "Randal" Duff created this Life Tributes page to make it easy to share your memories.

Send flowers to the Duff family.