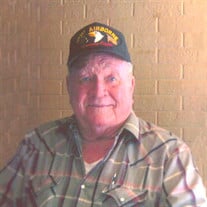 Charles “Shots” Joseph Lindsey, 86, of Troy, Missouri passed away on Wednesday, April 6, 2016 at his residence. He was born on January 19, 1930 in St. Louis, Missouri, a son of the late William Pike and Ruth Jane (Dillon) Lindsey. Shots was united in marriage to Dorothy Marie Elias on March 19, 1990 in Troy, Missouri. Shots proudly served his country in the United States Army from January 8, 1952 to January 7, 1954, with the 101st Airborne Division and was honorably discharged. He was a crane operator, with Operating Engineers Local 513 from 1946 until his retirement in 1996. Shots was a 61 year member of the Local 513 and was the Guard of Arms for the Local’s meeting for 21 years. He was a lifetime member of the Wentzville VFW 5327 and a previous member of Troy VFW Post 8828. In his earlier years he enjoyed pitching horse shoes, camping, fishing and hunting and especially squirrel. Shots enjoyed sharing stories about life and telling jokes, while enjoying a cold one. When the work needed to get done, he would be the first one to jump in and help. He took great pride in working on and restoring old cars and loved to dance. He is survived by his wife, Dottie Lindsey of Troy, three sons: Steve Lindsey and wife Kathy of Troy, Tom Lindsey of Troy and Ronnie Lindsey and wife Georgia of Troy; two step-sons: Scott Trog of Baldwin and Tim Trog and wife Sara of Baldwin; one brother: Larry E. Lindsey and wife Ruby of Ashland; one sister, Mary Jane Schalk and husband Whitie of O’Fallon; two dogs: Mollie and McGee; grandchildren: Angela, Nicole, Shannon, Mark, Eric and Sammy Jo; great-grandchildren: Reese, Sam, Allison, Audrey, Landon, Logan, Carley, Aiden, Jake, Catelyn and Macey; nieces, nephews, cousins and many, many friends. He was preceded in death by his parents, one son, Billy Lindsey, five brothers, William, John, Phillip, Bud and Gene Lindsey and one grandson, Jerry Lindsey. Family and friends will be received from 2:00 p.m. to 6:00 p.m. on Sunday, April 10, 2016 at KEMPER-MILLARD-KEIM Family Funeral Chapel located at 351 Monroe St. Troy, MO 63379. A funeral service will be held at 11:00 a.m. on Monday, April 11, 2016 at KEMPER-MILLARD-KEIM Family Funeral Chapel located at 351 Monroe St. Troy, MO 63379. Interment will be held at the Sacred Heart Catholic Cemetery in Troy, MO. Expressions of sympathy may be made to VFW 5327, in care of Kemper-Millard-Keim Family Funeral Chapel; P.O. Box 222, Troy, Missouri 63379. Online condolences may be made at www.kempermillardkeimfamilyfuneralchapel.com Phone 636-528-8221

The family of Charles "Shots" Joseph Lindsey created this Life Tributes page to make it easy to share your memories.

Send flowers to the Lindsey family.