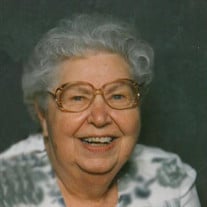 Clare L. Rickelman, 98, of Troy, Missouri, passed away on Friday, November 24, 2017 at the Troy Manor. She was born on March 22, 1919 in St. Louis, Missouri, a daughter of the late William A. and Louise L. (Schiwitz) Nicholas. Clare was united in marriage to Henry M. Rickelman on June 19, 1941 at the Sacred Heart Catholic Church in Florissant, MO and to this union two daughters and one son were born. Clare graduated from Ferguson High School in 1937. She worked for Wagner Electric Company and after the birth of her first child she became a homemaker. Clare had a true passion for animals, especially dogs. In her earlier years she loved spending time in her flower garden and was very particular about her yard. Her favorite holiday was Christmas, Clare and Henry won a prize for the best Christmas decorations. She is survived by her one daughter, Beverly Fowler and husband Bill of Troy, Missouri; one daughter-in-law, Gail Rickelman of Hazelwood, Missouri; eight grandchildren: Catherine Miller (Jim) of Silex, William Townes of Georgia, Deborah Brown of Georgia, Thomas Malone of Flordia, Paul Malone (Cindy) of Troy, Jeffrey Townes (Sarah) of Texas, Ann Blankenship (Clint) of Troy and William Rickelman (Red) of Sullivan; several great-grandchildren and great-great-grandchildren. She was preceded in death by her parents, her husband, Henry M. Rickelman on August 22, 2002, daughter, Jacqueline Townes, son, William Rickelman and one grandson, David Malone. Friends will be received from 4:00 p.m. to 7:00 p.m. on Sunday, November 26, 2017 at KEMPER-MILLARD-KEIM Family Funeral Chapel, located at 351 Monroe Street Troy, MO 63379. Funeral service will be held at 11:00 a.m. on Monday, November 27, 2017 at Kemper-Millard-Keim Family Funeral Chapel in Troy, Missouri. Interment will be held at the Troy City Cemetery in Troy, MO. Expressions of sympathy may be made to Pets Alone Sanctuary or American Cancer Society, in care of KEMPER-MILLARD-KEIM Family Funeral Chapel, P.O. Box 222 Troy, MO 63379. Arrangements are under the direction of KEMPER-MILLARD-KEIM Family Funeral Chapel; 351 Monroe Street Troy, MO 63379. Online condolences may be made at www.kempermillardkeimfamilyfuneralchapel.com Phone 636-528-8221

Clare L. Rickelman, 98, of Troy, Missouri, passed away on Friday, November 24, 2017 at the Troy Manor. She was born on March 22, 1919 in St. Louis, Missouri, a daughter of the late William A. and Louise L. (Schiwitz) Nicholas. Clare was united... View Obituary & Service Information

The family of Clare L. Rickelman created this Life Tributes page to make it easy to share your memories.

Send flowers to the Rickelman family.