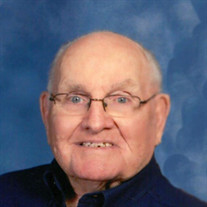 Clark Dale Peterson, 89, of Wentzville, Missouri, and formerly of Troy, Missouri, passed away on Wednesday, December 29, 2021 at his residence in Wentzville, Missouri. He was born on July 27, 1932 in Omaha, Nebraska the son of the late Albert and Mary (Underwood) Peterson. He was united in marriage to Louise Snodgrass on August 26, 1961 in Cantril, Iowa and to this union one daughter was born. Clark graduated from Milton High School in 1950. He served his country in the United States Navy from 1950 until he was honorably discharged in 1954. Clark then continued his education at Iowa Wesleyan College at Mount Pleasant Iowa with a degree in Bachelor of Science. He retired from Aldi Foods as a Production Manager after many years of dedication. After retirement Clark was never at an idle, he worked as a bus driver for the Lincoln County R-III School District, he delivered flowers for Troy Flower & Gift and various positions with Kemper-Marsh-Millard Family Funeral Chapel. Clark was a member of the Wentzville United Methodist Church. His life was taking his grandsons to baseball and golf. Clark was their #1 fan and those boys were his pride and joy. He valued the time he spent with his family and had a gentle smile that could light up a room. He is survived by his loving wife, Louise Peterson of Wentzville, MO; one daughter, Stacia Peterson of Wentzville, MO; two grandsons: Kurt and Trent Matheney of Wentzville, MO; two brothers: Theodore Peterson of Memphis, MO and wife, Donna who preceded in death; Douglas Peterson (Vi) of Melbourne, Australia; nieces, nephews, cousins and friends. He was preceded in death by his parents, Albert and Mary, 6 sisters and 1 brother. A graveside service will be held at 1:00 p.m. on Saturday, January 8, 2022 at Milton Sunnyside Cemetery in Milton, Iowa. Expressions of sympathy may be made to Wentzville United Methodist Church or United Services for Children (Clark’s daughter has been an active part for over 25 years), in care of Kemper- Keim Family Funeral Chapel P.O. Box 222 Troy, MO 63379. Arrangements are under the direction of Kemper- Keim Family Funeral Chapel; 351 Monroe Street, Troy, Missouri 63379. Online condolences may be made at www.kemperkeimfamilyfuneralchapel.com Phone 636-528-8221

The family of Clark Dale Peterson created this Life Tributes page to make it easy to share your memories.

Send flowers to the Peterson family.