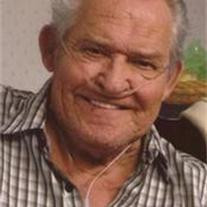 Clifford Russell Cole, 73, of Troy, passed away on September 7, 2012. He was born on July 4, 1939 in Paragould, Arkansas; a son of the late James and Mary Henderson. He was married to Margaret Dooley on April 23, 1982 in Troy, Missouri. He entered the Air Force on November 21, 1961 and was honorably discharged on August 19, 1966. He retired from McDonnell Douglas in October of 1996. Cliff was a member of the Troy Lions Club. He enjoyed taking road trips with the family, crappie fishing, deer hunting, building wooden model ships that were placed in a glass bottle, he rebuilt a Model A car, that was passed onto his daughter and collected Farmall Cub tractors. He had a great sense of humor and was always sharing laughter with his family and friends. Cliff loved spending time with his family, his wife, children and grandchildren, they held a special place in his heart. Cliff is survived by his loving wife of 30 years, Margaret Cole of Troy, Missouri; four children: James A. Cole and wife, Cheryl of Truxton, Missouri, Jeffrey S. Cole and wife, Lisa of Tipton, Indiana, Kenneth W. Cole of Barrow, Virginia; Carla C. Kinser and husband, Tim of Brownsville, Kentucky; when he married Margaret he gained three children: Karl E. Dooley and wife, Debby of Midwest City, Oklahoma, Sandra L. Jobe and husband, Jim of Winfield, Missouri and Lynelle C. Smith and husband, Jeff of Troy, Missouri; one brother, Larry Henderson; one sister, Barb Gibbs; nine grandchildren, four great-grandchildren, nieces, nephews and many friends. He was preceded in death by his parents. Friends will be received from 4:00 p.m. to 8:00 p.m. on Wednesday, September 12, 2012 at KEMPER-MARSH-MILLARD Family Funeral Home / Troy Chapel. Funeral services will be held at 11:00 a.m. on Thursday, September 13, 2012 at Asbury United Methodist Church in Foley, Missouri. Interment will be held in Asbury Cemetery. Expressions of sympathy may be made to American Cancer Research or American Heart Association. Arrangements under the direction of Kemper-Marsh-Millard Family Funeral Chapel; P. O. Box 222, Troy MO. Online condolences may be made at www.kempermarshmillardfamilychapels.com Ph.(636) 528-8221

Clifford Russell Cole, 73, of Troy, passed away on September 7, 2012. He was born on July 4, 1939 in Paragould, Arkansas; a son of the late James and Mary Henderson. He was married to Margaret Dooley on April 23, 1982 in Troy, Missouri.... View Obituary & Service Information

The family of Clifford Cole created this Life Tributes page to make it easy to share your memories.

Clifford Russell Cole, 73, of Troy, passed away on September...

Send flowers to the Cole family.