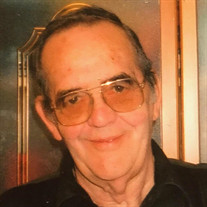 Clifford Raymond Seba “Junior”, 84, of Troy, Missouri, passed away peacefully on Thursday, November 1, 2018 at his residence in Troy, Missouri. He was born on June 10, 1934 in Bland, Missouri and was the son of the late Clifford and Hazel (Hicks) Seba. Cliff was united in marriage to Anna Benton on December 4, 1954 in Gerald, Missouri. Cliff graduated from Belle High School, entered the United States Army and was honorably discharged in 1959. After his service to his country he attended a Typographers Trade School in New York. He was the managing editor of the Troy Free Press for many years, and later opened his own printing office. Cliff worked alongside with his wife Anna for eleven years and they retired in 1996. He enjoyed hunting, fishing, and old car restoration. He is survived by his loving wife of 63 years, Anna Seba of Troy, MO; one son, Douglas Seba of Maryland Heights, MO; one brother, Gary Seba and wife Sandra of Belle, MO; two grandchildren: Michael and Lauren; two great-grandchildren: Zaine and Nash; nieces, nephews, cousins and friends. He was preceded in death by his parents, one infant brother, and his grandparents. Friends will be received from 12:00 p.m. to 1:00 p.m. on Saturday, November 10, 2018 at KEMPER-MILLARD-KEIM Family Funeral Chapel, located at 351 Monroe Street Troy, MO 63379. Funeral service will follow at 1:00 p.m. on Saturday, November 10, 2018 at the Troy Chapel. Interment will follow at the Troy City Cemetery in Troy, Missouri. In lieu of flowers expressions of sympathy may be made to American Cancer Society, in care of KEMPER-MILLARD-KEIM Family Funeral Chapel, P.O. Box 222 Troy, MO 63379. Arrangements are under the direction of KEMPER-MILLARD-KEIM Family Funeral Chapel; 351 Monroe Street Troy, MO 63379. Online condolences may be made at www.kempermillardkeimfamilyfuneralchapel.com Phone 636-528-8221

The family of Clifford Raymond Seba "Junior" created this Life Tributes page to make it easy to share your memories.