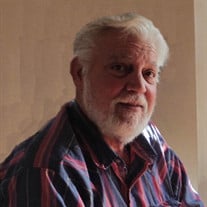 Craig William Amann, 65, of Hawk Point, Missouri passed away unexpectedly on Sunday, September 13, 2015 at his residence and was reunited with his son, Heath Earl Amann. He was born on July 16, 1950 in St. Louis, Missouri, a son of the late Earl and Jeanne (Oppeau) Amann. Craig was united in marriage to Alice Faye Henebry on October 8, 1971 at the St. Mary’s Catholic Church in Hawk Point, Missouri. Craig graduated from the Buchanan High School in 1968. He was a member of the Sheet Metal Workers' Local 36 and retired from Frank Fischer, Inc. in 2008. In his earlier years Craig liked spending time on the water, boating. Craig enjoyed fishing, deer hunting, 4-wheelin’ and shooting trap with his family. He had a special place in his heart for his dogs, especially Arnold and his chickens. Craig always loved watching his TV game shows, sitting around the table with his family and friends playing poker and pinochle, especially with Gene Smith and sharing his hunting and fishing stories. He was never at an idle, either mowing the grass, tending his tomato plants, trying for the first ripe or biggest tomato of the year or he was spending time with his family. Craig cherished every moment he spent with his family, but he truly took pride in spoiling his grandchildren. He is survived by his loving wife of 43 years, Alice Amann of Hawk Point; two daughters: Heidi Owenby and husband Darron of Troy and Heather Gray and husband Wayne of O’Fallon; grandchildren: Lily, Brianna and Cooper Owenby AKA Best Buddy, Alysan and Arianna Amann; mother-in-law, Geneva Henebry of Troy; sisters-in-law and brothers-in-law: Richard Henebry of Troy, Sissy Tuepker of Hawk Point, Betty Anne Smith and husband Gene of Winfield, Donna Reale and husband Jim of Defiance and Roberta Trost and husband Mike of Defiance; nieces and nephews: Michael, Robert and Michelle Henebry, Jill Brian and Kenny Dunard, Dawn Seeger, Keith Henebry and Joseph and Andrew Trost, Josh White, Kaleb and Ashleigh Henebry, Layne, Jaxon and Mason Henebry, Brenden Cockrell, Preston and Luke Seeger and many friends. He was preceded in death by his parents, Earl and Jeanne Amann, one infant daughter, Cynthia Allison Amann, one son, Heath Amann, one brother, Mark Amann, one sister, Susan Molle, his father-in-law, Robert “Bob” Henebry, two sisters-in-law, Mary Jane Henebry and Penny Henebry and one brother-in-law, Kenny Henebry. The family invites everyone to wear camo in Craig’s memory. Family and friends will be received from 4:00 p.m. to 8:00 p.m. on Thursday, September 17, 2015 at KEMPER-MILLARD-KEIM Family Funeral Home/ Hawk Point Chapel (41 Farm Lane Hawk Point, MO 63349). Funeral mass will be held at 10:30 a.m. on Friday, September 18, 2015 at the Sacred Heart Catholic Church (100 Thompson Drive Troy, MO 63379). Interment will be held at a later date at the Hawk Point City Cemetery. In lieu of flowers expressions of sympathy may be made to The Family of Craig William Amann, as per Craig’s wishes that the memorials go towards his grandchildren’s education fund c/o Kemper-Millard-Keim Family Funeral Home. Arrangements are under the direction of Kemper-Millard-Keim Family Funeral Chapel; P.O. Box 222, Troy, Missouri 63379. Online condolences may be made at www.kempermillardkeimfamilychapels.com Phone 636-338-4375

Craig William Amann, 65, of Hawk Point, Missouri passed away unexpectedly on Sunday, September 13, 2015 at his residence and was reunited with his son, Heath Earl Amann. He was born on July 16, 1950 in St. Louis, Missouri, a son of the late... View Obituary & Service Information

The family of Craig William Amann created this Life Tributes page to make it easy to share your memories.

Send flowers to the Amann family.