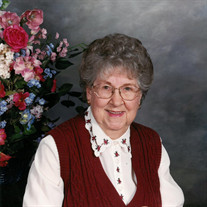 D’Arline Elizabeth Shaw, 98, of Hawk Point, Missouri, passed away peacefully on Thursday, March 28, 2019 at Oak Pointe of Warrenton Assisted Living and Memory Care in Warrenton, Missouri. She was born on February 9, 1921 in Hawk Point, Missouri and the daughter of the late Albert and Elizabeth “Lizzie” (Frank) Neuman. She was united in marriage to Manuel Ernest Shaw on September 2, 1939 in St. Louis, Missouri. D’Arline worked as a Cashier at the Enterprise Store in Hawk Point, but was primarily a homemaker. She was an active member of the Hawk Point Baptist Church for many years. D’Arline enjoyed quilting especially with her group of ladies at the St. Mary’s Quilting group. She was very particular about her yard and took great pride in it. D’Arline spent many hours with the youth as a 4-H sewing leader. She was an instrumental part of her grandchildren’s life while they were growing up and she will be deeply missed. She is survived by her loving son, Cornelius Shaw of Warrenton, MO; three grandchildren: Dr. Albert Cornelius Shaw and wife Leslie of Columbia, MO, Ernest Cornelius Shaw and wife Becky of Columbia and Priscilla Fay Shaw of Warrenton; two grandchildren: Evelyn Shaw and Harrison Shaw; nieces, nephews and friends. She was preceded in death by her parents, her husband, one daughter-in-law, June Fay Shaw and siblings: Dena Hutton, Lillie Mudd, Mamie Norton, Jessie Monroe and Albert Neumann. Family and friends will be received from 2:00 p.m. to 5:00 p.m. on Sunday, March 31, 2019 at the KEMPER-MILLARD-KEIM Family Funeral Chapel located at 41 Farm Lane Hawk Point, MO 63349. Funeral service will be held at 11:00 a.m. on Monday, April 1, 2019 at Hawk Point Baptist Church located at 220 Main Street Hawk Point, MO 63349. Interment will be held at Hawk Point City Cemetery. In lieu of flowers, expressions of sympathy may be made to Hawk Point Baptist Church in care of Kemper-Millard-Keim Family Funeral Chapel, P.O. Box 222 Troy, MO 63379. Arrangements are under the direction of Kemper-Millard-Keim Family Funeral Chapel; 41 Farm Lane Hawk Point, MO 63349. Online condolences may be made at www.kempermillardkeimfamilyfuneralchapel.com Phone 636-338-4375.

The family of D’Arline Elizabeth Shaw created this Life Tributes page to make it easy to share your memories.

Customized sympathy cards. Mailed for you.