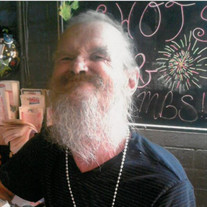 Daniel “Danny- Dan the Can Man” Lewis Schneider passed away at SSM Health St. Joseph Hospital in Lake Saint Louis on Friday, November 22, 2019 surrounded by his friends. He was born August 31, 1952 to Charles Henry Schneider and Dolores Norma Allen. He was the 6th of 8 children. He was raised in Glencoe, Missouri, lived at the St. Louis State School from 1962 until he moved to The Johnson Home in Silex. In 1985 he moved to Troy where he spent the remainder of his life. Danny was united in holy matrimony at the Troy First Assembly of God, to Gloria Weaver on May 18, 1991. Gloria proceeded Danny in death in 2005. Danny “Dan the Can Man” was a long-time resident of Troy, Missouri and had many friends throughout the community. Many people would save their cans for Danny to collect and recycle. He was a hard worker and was employed at Earthwise Industries for many years. He worked at the Troy Hardees for several years in the 1990s. Danny also worked at BCI in Moscow Mills, where he retired from in 2014. Danny was a great friend to many people, especially Lanny and Joey. He was always ready to share a cup of coffee and a cigarette. He was quite the jokester and loved to make people laugh. He was a long-time patron of Good Times Bar and Grill in Troy, rarely missing an evening with friends, sitting by the door and welcoming them. He was fiercely independent, extremely private at times and lived his life exactly the way he wanted. In his younger days Danny enjoyed woodworking and building things. He was very creative and had his own style. He will be greatly missed by his numerous friends. A celebration of life service will be held at 4:00 p.m. on Thursday, December 19, 2019 at NorthRoad Community Church - Moscow Mills Campus at 49 College Campus Dr, Moscow Mills, MO 63362. In lieu of flowers, expressions of sympathy may be made to Community Opportunities in care of Kemper-Millard-Keim Family Funeral Chapel, P.O. Box 222 Troy, MO 63379. Arrangements are under the direction of Kemper-Millard-Keim Family Funeral Chapel; 351 Monroe Street Troy, MO 63379. Online condolences may be made at www.kempermillardkeimfamilyfuneralchapel.com Phone 636-528-8221.

Daniel &#8220;Danny- Dan the Can Man&#8221; Lewis Schneider passed away at SSM Health St. Joseph Hospital in Lake Saint Louis on Friday, November 22, 2019 surrounded by his friends. He was born August 31, 1952 to Charles Henry Schneider and... View Obituary & Service Information

The family of Daniel "Danny" Lewis Schneider created this Life Tributes page to make it easy to share your memories.

Daniel “Danny- Dan the Can Man” Lewis Schneider passed away at...

Send flowers to the Schneider family.