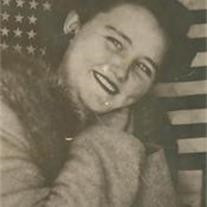 Darlies Marie Smithey, 85, of Hawk Point, Missouri passed away on Saturday, April 6, 2013 at St. Joseph Hospital in St. Charles. She was born on November 3, 1927 Black Oak, Arkansas, a daughter of the late Frank W. and Lizzie M. (Ball) Miller. She was united in marriage to Lonnie Smithey, Sr. on March 11, 1945 in Marion, Arkansas. To this union six children. Darlies was employed for Schluter Manufacturing in St. Louis for 30 years prior to her retirement and then became a homemaker. She enjoyed quilting, sewing, gardening especially, her flowers and loved to listen to music. Darlies was loving, caring, well rounded person, who had a heart of gold and never knew a stranger. She loved spending time with her family and friends, even as the family would bring friends over they became part of the family as well. Darlies favorite times were spent with her husband, children, grandchildren, great-grandchildren and great-great grandchildren. She is survived by her loving husband of 69 years: Lonnie Smithey, Sr. of Hawk Point, Missouri; children: Lonnie Smithey, Jr. and wife, Jackie of Leslie, Missouri, Mary Stallard and husband, Ray of Hawk Point, Missouri, Doris Ellington and husband, Rick, of Hawk Point, Missouri, Ronald Smithey and wife, LeAnne of Hawk Point, Missouri and Donald Smithey and wife, Linda of Hawk Point, Missouri; fifteen grandchildren, twenty three great-grandchildren and six great-great-grandchildren; one sister-in-law, two brother-in-laws, nieces, nephews, numerous family members and many friends. She was preceded in death by her parents, one daughter, JoAn Spradling, four brothers, three sisters, five brother-in-laws and four sister-in-laws. Friends will be received from 4:00 p.m. to 8:00 p.m. on Wednesday, April 10, 2013 at KEMPER-MARSH-MILLARD Family Funeral Home / Hawk Point Chapel (41 Farm Lane, Hawk Point, MO 63349). Funeral services will be held at 11:00 a.m. on Thursday, April 11, 2013 at the Hawk Point Chapel. Officiating will be Reverend James Huffman. Interment will be held at Hawk Point Cemetery. Expressions of sympathy may be made to Lincoln County Relay For Life, in care of Kemper-Marsh-Millard Family Funeral Chapel; (P.O. Box 222 Troy, MO 63379). Online condolences may be made at www.kempermarshmillardfamilychapels.com Ph.(636) 338-4375

The family of Darlies Smithey created this Life Tributes page to make it easy to share your memories.

Send flowers to the Smithey family.