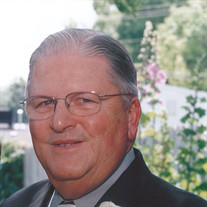 Sweet are the Memories that Never Fade – Darrel Lee Harris, long- time resident and loving husband of Virginia Harris, adored father of Sherri Selman, Brad Harris and Shelly Fox, and treasured grandfather of Josh Harris, passed away peacefully March 11th in Alpharetta, Georgia where he was residing near his daughter Sherri after a lengthy illness. Born in Verona, Missouri on December 29th, 1935, Darrel grew up enjoying the Ozarks and working on the family farm. The youngest of three children, born to Orlen and Sylvia Harris, and brother to Gene Harris and Waneta Rea, all preceding him in death. Darrel met Virginia Bell in High School and they married in 1954. They resided in Aurora, Missouri, where their three children were born. The family moved to Troy in 1967 when Darrel was hired to manage the Coop Fertilizer Plant. In 1984, he was promoted to General Manager of the Lincoln County Farmers Coop. This is where many of you became acquainted with the man known as “Chunky”; but all knew him for his laughter, great character, generous and kind heart. Darrel never met a stranger and loved his work and the surrounding community. With an endlessly curious mind, he traveled the surrounding counties and states in search of great deals, interesting antiques and a savory meal. Darrel was known for his talent in the kitchen and if you were lucky, you were on the receiving end of his famous “Chunky’s Chili”! Darrel always put his family first and was fortunate to enjoy his two great passions in life with his children – farming alongside his beloved son and grandson and traveling the country with his daughters. His adventurous spirit led him to the mountains out west and the oceans. He had a strong affection for Montana where he so enjoyed the wildlife and beautiful outdoors. But farming was his true love, and the time he spent with Brad, Josh and good friend Jake Bockhorst. Darrel’s only son, Brad, sadly preceded him in death on February 4, 2000. With great sadness also comes great joy, and that is what he found in Brad’s only son, Josh, his wife Staci and their three beautiful daughters: Lexi, Jadyn and Kendall. Darrel is survived by his wife Virginia and daughters Sherri Selman of Alpharetta, Georgia and Shelly Fox of Phoenix, Arizona. He will be greatly missed by son- in- laws: Mark Selman and Larry Fox and daughter -in- law, Cindy Harris Malone, all of whom he was very close to. A social gathering will be held from 12:00 p.m. to 1:30 p.m. on Sunday, May 21st, 2017 at the KEMPER-MILLARD-KEIM Family Funeral Chapel, located at 351 Monroe Street Troy, MO 63379. Celebration of Darrel’s Life will follow at 1:30 p.m. at the Chapel. Officiating the service is David Thompson. Interment will follow at Anderson Hill – Friedens Cemetery. The family looks forward to seeing all of his friends and loved ones. Arrangements are under the directions of KEMPER-MILLARD-KEIM Family Funeral Chapel; P.O. Box 222 Troy, MO 63379. Online condolences may be made at www.kempermillardkeimfamilyfuneralchapel.com Phone: (636) 528-8221

The family of Darrel Lee Harris created this Life Tributes page to make it easy to share your memories.

Send flowers to the Harris family.