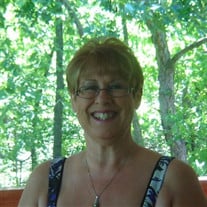 Deborah “Debbie” Ann Carey, 62, of Troy, Missouri, passed away on Friday, September 12, 2014 at the St. Joseph Hospital West in Lake Saint Louis, Missouri. She was born on November 24, 1951 in Oceanside, California, the daughter of Kenneth and Erna (Bowling) Kelley. She was united in marriage to John W. Carey on October 27, 1979. Debbie graduated from Booneville High School in 1969. John and Debbie lived in St. Peters, Missouri for many years and in 1993 they decided to move to Troy. Debbie retired after 27 years from University of Missouri St. Louis as an office manager. She enjoyed crocheting and was an avid reader. After retirement she took on a new hobby of refurbishing furniture. Debbie was a caring, compassionate woman, who was always lending a helping hand to others. She was a second mom to many and spoiling her grandchildren was her top priority. Debbie was very active in her family’s lives and was always present at her grandchildren’s activities. She was a loving, wife, mother, grandmother, daughter, sister, aunt and friend to many. She will be deeply missed by those who knew and loved her. She is survived by her loving husband of 34 years, John Carey of Troy, MO; one daughter, Shannon L. Miller of Troy, MO; one son, John Miller and wife, Tara of O’Fallon, MO; her mother, Erna Kelley of Troy, MO; two brothers, Patrick Kelley and wife Linda, of Columbia, MO and Mike Kelley and wife, Debbie of Columbia; one sister, Cindy Hohn and husband, Kevin of Winfield, MO; grandchildren, Brandon and Alex Miller of Troy, MO and Layne and Tatum Miller of O’Fallon, MO; brothers-in-law and sisters-in-law, Don Carey and wife, Dian of Pilot Grove, MO, Pamela Young of Columbia, MO and Geraldine Vincent and husband, Allen of Columbia; nieces, nephews, cousins and friends. She was preceded in death by her father, Kenneth F. Kelley. Friends will be received from 2:00 p.m. to 3:00 p.m. on Tuesday, September 16, 2014 at KEMPER-MILLARD-KEIM Family Funeral Home / Troy Chapel. Funeral services will be held at 3:00 p.m. on Tuesday, September 16, 2014 at the chapel. Expressions of sympathy may be made to the American Heart Association in care of Kemper-Millard-Keim Family Funeral Chapel; P.O. Box 222, Troy, MO 63379. Online condolences may be made at www.kempermillardkeimfamilychapels.com Ph.(636) 528-8221

The family of Deborah "Debbie" Ann Carey created this Life Tributes page to make it easy to share your memories.

Send flowers to the Carey family.