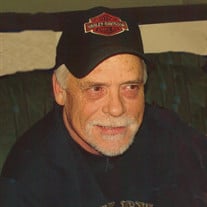 Dennis “Denny” Robert Brooks, 67, of Troy, passed away peacefully on Friday, January 22, 2016 at his residence in Troy, Missouri. He was born on May 28, 1948 in St. Louis, Missouri, a son of Cloice D. and Lucille G. (Prosser) Brooks. Denny was married to Paula “Polly” Faye Baker, on June 4, 1976 in Clayton, Missouri and she preceded him in death on July 16, 2009. He met Linda Gilmore on January of 2010 and he asked for her hand in marriage. Denny graduated from Ritenour High School and continued his education at a community college. He retired after 35 years of hard work from Pennzoil Company in Maryland Heights. When he found the time, he liked to fish, had a passion for horses in his earlier years and most recently, riding his Harley Davidson motorcycle. Denny was an avid sports fan, that started young in life with playing baseball in the Minor Leagues and he continued to play in the local Khoury Leagues. He enjoyed watching sports on the television, he would spend most of his Sunday’s watching football and you could always tell who was winning or losing by Denny’s reaction to the game. Denny cherished the time he spent with his family and the memories he made with Linda. He is survived by his fiancé, Linda Gilmore of Troy; three daughters: Tracy Brooks of Overland, Dena Hampton-Hussein of St. Charles and Mandy Koch and husband Josh of Troy; two sons: David Brooks of Herman and Scott Brooks of Wentzville; eleven grandchildren, nieces, nephews, cousins and friends. He was preceded in death by his wife, parents, one daughter, Carry Jack Hampton and one brother, Darrell Brooks. Friends will be received from 12:00 p.m. to 2:00 p.m. on Tuesday, January 26, 2016 at KEMPER-MILLARD-KEIM Family Funeral Home / Troy Chapel. Funeral services will be held at 2:00 p.m. on Tuesday, January 26, 2016 at the funeral home. Interment will be held in Troy City Cemetery. In Lieu of flowers, expressions of sympathy may be made to the American Lung Association in care of Kemper-Millard-Keim Family Funeral Chapel; P. O. Box 222, Troy MO. Online condolences may be made at www.kempermillardkeimfamilychapels.com Ph. (636) 528-8221

The family of Dennis "Denny" Robert Brooks created this Life Tributes page to make it easy to share your memories.

Send flowers to the Brooks family.