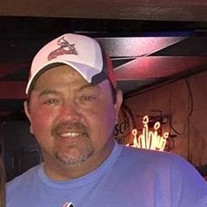 Dennis “Denny” Etchason, Jr., 48, of Moscow Mills, Missouri, passed away on Friday, May 26, 2017 at his residence. He was born on August 9, 1968 in Charles, Missouri, a son of Dennis J. Etchason, and Diane (Ruebling) Etchason. Denny graduated from St. Charles High School and continued his education as an Technical Jet Mechanic. He worked in Avation for Avmat’s. Denny enjoyed playing in a pool league every Thursday night and riding his Harley. Denny is survived by his one daughter, Nichole Etchason of Troy, MO; his father, Dennis Etchason, Sr. of Eolia, MO; one sister, Donna Craig of St. Charles, MO and a very close nephew, Kristopher Etchason of St. Geneieve, MO; He was preceded in death by his mother, Diane Craig and one brother, Scott Etchason. Family and friends will be received from 5:00 p.m. to 8:00 p.m. on Monday, May 29, 2017 at the KEMPER-MILLARD-KEIM Family Funeral Chapel located at 351 Monroe Street Troy, MO 63379. Funeral service will be held at 11:00 a.m. on Tuesday, May 30, 2017 at KEMPER-MILLARD-KEIM Family Funeral Chapel in Troy, Missouri. Interment will be held at the Oakgrove Cemetery in St. Charles, Missouri. Expressions of sympathy may be made to Denny Etchason Scholarship Fund in care of KEMPER-MILLARD-KEIM Family Funeral Chapel, P.O. Box 222 Troy, MO 63379. Arrangements are under the direction of KEMPER-MILLARD-KEIM Family Funeral Chapel; 351 Monroe Street Troy, MO 63379. Online condolences may be made at www.kempermillardkeimfamilyfuneralchapel.com Phone 636-528-8221

The family of Dennis J. Etchason Jr. created this Life Tributes page to make it easy to share your memories.

Send flowers to the Etchason family.