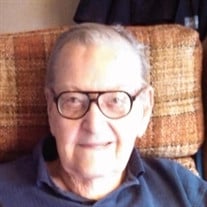 Derek Gordon Beattie, 93, of Troy, Missouri, passed away on Saturday, October 10, 2020 in Troy, Missouri. He was born on January 22, 1927 in Sunderland, England, the son of David Gordon and Minnie (Edwards) Beattie. He was united in marriage to Thelma McWatt on February 14, 1953 in British Guiana and she preceded him in death on July 20, 2004. Derek started his life in a humble environment that was rich in history. He was just a young teen when World War II began and saving the children meant they were removed from their homes and sent to safe areas. Derek's first experience was life with a shepherd in the hills with no electricity or running water! He later gained a 2nd family in Nottingham whose friendship lasted a lifetime. He enlisted with the British Navy and was the first in his family to go to University earning a mechanical and electrical degree which landed him a job with Bookers International on Sugar Plantations all over the world. The first being in British Guiana where he met and married his wife Thelma. Together with their daughter Dianne they spent many years in Jamaica. Dianne met, married and moved to America with her husband Greg who with their 2 children (Missy and Matt) moved to Troy, MO in 1992. Derek and Thelma retired to Troy in 1995 where they were cherished members of family life until their end of days. He will be remembered and missed by immediate family, nieces, nephews and friends and will remain - Forever in our hearts! He is survived by his one daughter, Dianne Schuster and husband Greg of Troy, MO; two grandchildren: Matthew Schuster and Melissa Schuster Joachimstaler (Brian); three great-grandchildren: Billy, Keith and Sarah and one great-great-granddaughter: Aria. He was preceded in death by his parents, David and Minnie Beattie, his wife, Thelma Beattie, one sister, Brenda Johnson and her husband Tom. Services will be held private. Expressions of sympathy may be made to American Cancer Society in care of KEMPER-MILLARD-KEIM Family Funeral Chapel, P.O. Box 222 Troy, MO 63379. Arrangements are under the direction of KEMPER-MILLARD-KEIM Family Funeral Chapel; 351 Monroe Street Troy, MO 63379. Online condolences may be made at www.kempermillardkeimfamilyfuneralchapel.com Phone 636-528-8221

Derek Gordon Beattie, 93, of Troy, Missouri, passed away on Saturday, October 10, 2020 in Troy, Missouri. He was born on January 22, 1927 in Sunderland, England, the son of David Gordon and Minnie (Edwards) Beattie. He was united in marriage... View Obituary & Service Information

The family of Derek Gordon Beattie created this Life Tributes page to make it easy to share your memories.

Derek Gordon Beattie, 93, of Troy, Missouri, passed away on Saturday,...

Send flowers to the Beattie family.