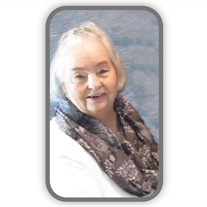 Dimples O. Hynes, 73, of Troy, Missouri passed away on Friday, September 4, 2015, surrounded by her family. She was born on October 17, 1941 in Portage Ville, Missouri the daughter of the late Charles and Lethia Hatfield. She was united in marriage to Richard Hynes on April 7, 1959 at the Justice of the Peace in St. Louis, Missouri and to this union two sons and two daughters were born. Dimples was a cook at the BJC Nursing Home for 25 years. She was a yard sale queen and could always spot a treasure. Dimples always wanted to help her children, grandchildren and the ones she loved, but never asked anything in return. She enjoyed reading a good book and a passion for animals especially, her four legged friends, Milo and Bear. Dimples had quite the collection of angels and porcelain dolls. She took great pride in spoiling her grandchildren and cooking every time the family was together. She is survived by her loving husband Richard Hynes of Troy; her children, Richard “Rick” Hynes and wife Beth of Wentzville, Terry Hynes and wife Donna of Florissant, Sonia Hynes and significant other Bob Payeur of Florissant and Diana Schaffer and husband Rick of Wentzville; one brother, John Henry Hatfield of Troy; one brother-in-law, Norm Zweifel of Linn; grandchildren: Rob and Nikki, Mark, Sam, Piper, Nayomi, Jenifer, Jimmy, Katie, Amanda and Shawn, Michael and Michelle, Matthew, Alex and Megan; great-grandchildren: Patrick, Taylor, Kiera, Sophia, Skylar, Maximus, Dylan, Samara, Caleb, Moses, Evie and another on the way, nieces, nephews and numerous relatives. She was preceded in death by her parents, one brother, David Hatfield, one sister, Jenny Zweifel and one sister-in-law, Nadine Hatfield. Friends will be received from 3:00 p.m. to 7:00 p.m. on Monday, September 7, 2015 at the KEMPER-MILLARD-KEIM FAMILY FUNERAL HOME/ TROY CHAPEL. A Celebration of Life will be held at 11:00 a.m. on Tuesday, September 8, 2015 at the KEMPER-MILLARD-KEIM FAMILY FUNERAL HOME/ TROY CHAPEL. Interment will be held at the Memorial Park Cemetery. Expressions of sympathy may be made to the Lincoln County Relay for Life or Pets-A-Lone Sanctuary, in care of Kemper-Millard-Keim Family Funeral Chapel; P.O. Box 222, Troy, MO 63379. Online condolences may be made at www.kempermillardkeimfamilychapels.com Ph.(636) 528-8221

Dimples O. Hynes, 73, of Troy, Missouri passed away on Friday, September 4, 2015, surrounded by her family. She was born on October 17, 1941 in Portage Ville, Missouri the daughter of the late Charles and Lethia Hatfield. She was united in... View Obituary & Service Information

The family of Dimples O. Hynes created this Life Tributes page to make it easy to share your memories.

Send flowers to the Hynes family.