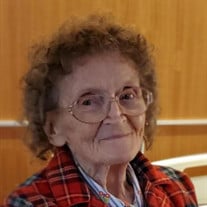 Dolores (Doe) Dorothy Vejvoda, 93, of Hawk Point, Missouri, passed away on Tuesday, April 26, 2022 at Mount Carmel Senior Living in St. Charles, MO. She was born on November 7, 1928 in St. Louis, Missouri, a daughter of the late Frank Stephen and Marie Anna (Tuma) Holba. She was united in marriage to William (Van) Vejvoda on June 12, 1950 at St. Phillip Neri in St. Louis, Missouri and he preceded her in death on November 23, 2011. To this union three daughters were born. Dolores began life in St Louis, MO. She was employed at Herz Candy Store, Moser Box Factory and later became a homemaker. After marrying William (Van), she moved from St. Louis and fell in love with country living. Some of her most favorite hobbies were cooking, baking and gardening. When family would gather, Dolores wouldn’t just make a simple meal, but would insist on making everyone’s favorite dishes which would lead to 3 meats, 5 vegetables, 2 potatoes and at times 8 desserts. When you were at Dolores’s house, you never left hungry or without food. She loved her vegetable and flower gardens, allowing her to can fresh produce and always sharing with others. When anyone entered her home, it was a simple, a comfortable space where the outside world and its problems were forgotten. It was easy to listened to her talk, laugh, sing and at times dance. She found good in everyone she met. If you can imagine someone being described as a “fresh cut flower in a warm, sunny room with a breeze and was comforting warmth that enveloped you on a cold, cloudy day” that was her. That was often times how she was described whether they were meeting her for the first time or she was just entering a room. Her selflessness was never-ending and materialist things meant nothing to her, but she would have given her family the world if she could have. Dolores loved her family and was loved beyond all measures. Her love for family and friends kept her fighting, but she is finally reunited with the love of her life, imagine the joy she’s experiencing again. Dolores is survived by two daughters: Joanne Holloway of Santa Fe, MO and Shirley Vejvoda of St. Charles, MO; one son-in-law, Bill Lawrence of Hawk Point, MO; sisters-in-law: Marian Holba and Margaret Holba; six grandchildren: Melanie James, Becky Clifton, Christy Gaskin (Doug), Angie Harris (Jeff), Bill Lawrence (Alana) and Mark Lawrence; eleven great-grandchildren: Gabrielle Clifton, Reece Clifton, Alayna Gaskin, Madalyn Gaskin, AJ Gaskin, Camille Gaskin, Kinley Harris, Kamden Harris, Jude Lawrence, Olivia Lawrence and Luke Lawrence; nieces, nephews, cousins and friends. She was preceded in death by her parents, her husband, one daughter, Ann Lawrence, one son-in-law, Jim Holloway, three brothers: Charles Holba, Francis Holba and Robert Holba; one sister, Marie Rose and one brother-in-law, Jack Rose, Jr. As William (Van) and Dolores (Doe) experienced most of their life together, as per their wishes a memorial mass will be held at 11:00 a.m. on Saturday, May 7, 2022 at the St. Mary’s Catholic Church located at 458 Main St. Hawk Point, MO 63349. A private interment will be held at St. Mary’s Cemetery in Hawk Point, MO. Expressions of sympathy may be made St. Mary’s Catholic Church or St. Mary’s Cemetery in care of Kemper-Keim Family Funeral Chapel P.O. Box 222 Troy, MO 63379. Arrangements are under the direction of Kemper-Keim Family Funeral Chapel; 41 Farm Lane Hawk Point, MO 63349. Online condolences may be made at www.kemperkeimfamilyfuneralchapel.com Phone 636-338-4375.

The family of Dolores Dorothy Vejvoda created this Life Tributes page to make it easy to share your memories.

Send flowers to the Vejvoda family.