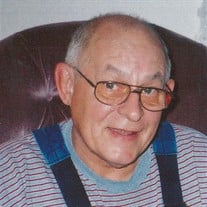 Donald Charles Prinster, Sr., 82, of Troy, Missouri passed away on Sunday, December 28, 2014 at The Villages of St. Peters in St. Peters, Missouri. He was born on March 9, 1932 in St. Charles, Missouri, a son of the late Harry C. and Melbourne (Kohlenhoefer) Prinster. Donald was united in marriage to Dolores McGarvey on June 6, 1953 at St. Peter’s Church in St. Charles, Missouri. To this union four sons and one daughter were born. Donald graduated in 1951 from St. Peter’s Catholic High School in St. Charles. He entered in the Air Force in 1951, during the Korea War and was honorably discharged in 1952. Donald retired after 40 years as Welder and was a welding instructor at Lewis and Clark Technical School for several years. He enjoyed watching John Wayne Movies, fishing and in his earlier years, duck hunting. Donald loved spending his time with his family and being outdoors. He is survived by his loving wife of 61 years, Dolores Prinster of Troy; four sons, Don C. Prinster, Jr. of Wentzville, David M. Prinster and wife, Vanessa of St. Charles, Daniel Prinster, Sr. and wife, Julie of Troy and David “Davey” Prinster and wife, Melissa of Troy; two sisters, Janet Wilhelm and husband, Roger of St. Charles and Mary Ann Vick of St. Charles; thirteen grandchildren, nineteen great-grandchildren and another on the way, nieces, nephews and numerous relatives. He was preceded in death by his parents, his one daughter, Dorothy Prinster-Hyde, his one brother, Ralph Prinster, his sister-in-law, Mary Ellen Prinster and his great-granddaughter, Lauren Francis. Services will be held private for the family. In lieu of flowers expressions of sympathy may be made to The Family of Donald C. Prinster, Sr. in care of Kemper-Millard-Keim Family Funeral Chapel; P.O. Box 222, Troy, MO 63379. Online condolences may be made at www.kempermillardkeimfamilychapels.com Ph.(636) 528-8221

Donald Charles Prinster, Sr., 82, of Troy, Missouri passed away on Sunday, December 28, 2014 at The Villages of St. Peters in St. Peters, Missouri. He was born on March 9, 1932 in St. Charles, Missouri, a son of the late Harry C. and Melbourne... View Obituary & Service Information

The family of Donald Charles Prinster Sr. created this Life Tributes page to make it easy to share your memories.

Send flowers to the Prinster family.