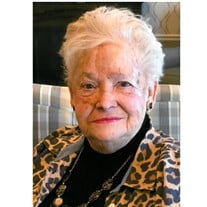 Dorothy Mae Frock, 91, of Troy, MO, formerly of Kearney, MO, passed away on Sunday, June 20, 2021 at the Lincoln County Nursing and Rehab in Troy, MO. Dorothy was born on November 29, 1929, in Greeley, Colorado, the daughter of the late Larkin and Ida Mae (Stivers) Wilcoxson. On June 5, 1965, Dorothy was united in marriage to Earl A. Frock. He preceded her in death on August 4, 2008. Dorothy was a 1947 graduate of Central High School in Kansas City, MO where she won an award for typing 120 words a minute without a mistake. After graduation, she attended secretarial business and took courses with “Betty Bonn” modeling agency in Kansas City, MO. She was a bookkeeper and secretary for 11 years with American Chair CO. in Kansas City, MO and for 4 years with Kopper’s Co. in Overland Park, Kansas. She was also an assistant manager for Royal Food Stores in Kansas City, MO for 3 years. After her daughter, Rhonda was born, Dorothy volunteered for many organizations. Through the American Red Cross, she taught baby sitting classes for 10 years in Liberty Public School and was a volunteer at Spelman Hospital in Smithville, MO. Dorothy was a 4-H leader for the Happy Northeasterners 4-H Club in Clay County for 11 years and was a Camp Fire Girls leader in Liberty, MO for 10 years. She also served as an election judge for 40 years in Clay County and was a pathfinder for 50 years for Platte-Clay Electric Co in Kearney, MO lobbying on house bills in Jefferson City, MO. She was also a 50 year member of the Missouri Association of Family and Community Education (FCE) holding the office of State Vice President and was a lifetime member of Eastern Star in Lenexa, Kansas serving as Worthy Matron in 1964. Dorothy was a member of Liberty Christian Church and the American Wildlife Federation. Her passion was the Kansas City Royals attending many opening day games. She also liked to make crafts, cook and sew. She was a good seamstress making pageant dresses for her daughter, clothes for her mother-in-law and formal Eastern Star evening gowns for herself. She also liked gospel and country music as well as broadway songs. In addition, Dorothy loved to travel visiting New Zealand, Tailand, Canada, Alaska, Hawaii and many U.S. cities. Dorothy was a loving person and could make friends very easily. She never met a stranger that didn’t become an instant friend. She is survived by one son, Fred Downen and wife Marlyce of Louisburg, Kansas; one daughter, Rhonda Shafer and husband Jay of Troy, MO; two grandchildren: Michelle Smart and husband Dave of Bonner Springs, Kansas and Daniel Downen and wife Deanne of Mandamia, Iowa; step-granddaughter, Jaime Carroz and husband Jeremy of Troy, MO; seven great-grandchildren: Brandon, Olivia, Jeanine and Emily Smart and Hannah, Danielle and Lane Downen; step-great-grandson, Spencer Carroz. She is also survived by one sister, Mary Bankston of Baldwin City, Kansas and brother-in-law, Denis Miller of La Belle, MO as well as many nieces, nephews, and dear friends. In addition to her husband and parents, Dorothy was preceded in death by one sister Carolyn Miller and one brother-in-law, Milton Bankston. Family and friends will be received from 4:00 p.m. to 8:00 p.m. on Wednesday, June 23, 2021 at KEMPER-KEIM Family Funeral Chapel located at 351 Monroe Street Troy, MO 63379. An additional visitation will be held from 10:00 a.m. to 12:00 p.m. on Thursday, June 24, 2021 at Park Lawn Northland Chapel located at 1640 N, RTE 291 Liberty, MO 64068. Funeral service will be held at 12:00 p.m. at the Park Lawn Northland Chapel. Internment will be held at the Glenridge Cemetery. In lieu of flowers expressions of sympathy may be made to Missouri 4-H Foundation , Missouri Association of Family and Community Education in care of Kemper-Keim Family Funeral Chapel P.O. Box 222 Troy, MO 63379. Arrangements are under the direction of Kemper-Keim Family Funeral Chapel; 351 Monroe Street, Troy, Missouri 63379. Online condolences may be made at www.kemperkeimfamilyfuneralchapel.com Phone 636-528-8221

Dorothy Mae Frock, 91, of Troy, MO, formerly of Kearney, MO, passed away on Sunday, June 20, 2021 at the Lincoln County Nursing and Rehab in Troy, MO. Dorothy was born on November 29, 1929, in Greeley, Colorado, the daughter of the late Larkin... View Obituary & Service Information

The family of Dorothy Mae Frock created this Life Tributes page to make it easy to share your memories.

Send flowers to the Frock family.