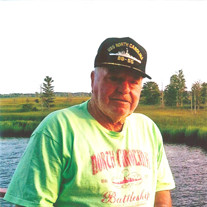 Earl Laverne Collins, 88, of Troy, Missouri, passed away on Friday, October 28, 2016 at St. Joseph West Hospital in Lake Saint Louis, Missouri. He was born on December 19, 1927 in Lincoln County and was the son of the late Arthur and Effie (Perry) Collins. Earl was united in marriage to Helen Elizabeth Richardson on June 2, 1951 in St. Louis, Missouri and to this union six children were born. Earl knew the value of hard work at a young age while farming and raising livestock He worked as a Laborer in Construction and was a member of the Union Local #660. Earl was an outdoor enthusiast, he spent many hours hunting in the woods with the beagle pups he raised. With a true passion for baseball, Earl played for many years, coached his daughter’s softball teams and enjoyed cheering on the St. Louis Cardinals. He was a member of the New Fellowship Baptist Church in Troy, MO. Earl and Helen put in many hours maintaining the lawn at the Wilson Cemetery for several years. Earl was a hardworking man, but cherished the time he spent with his family. He enjoyed playing a family game of horse shoes, volleyball or even just watching his family making memories. He is survived by his loving wife of 65 years, Helen Collins of Troy; three daughters: Judy Collins of Troy, Janice Lashley and husband Kelvin of Wright City, MO and Earline Murphy of Troy, MO; one son, Dale Collins and wife Nancy of Moscow Mills, MO; one son-in-law, Steve Benten of St. Charles, MO; siblings: Kenneth Collins (Terri), Darlene Hunter, Clifford (Nona) and Wanda Regot; grandchildren: Tishia, Kelly (Tom), Jennifer (Bill), Joshua, Lance (Kathy), Jody (Amy), Jacob, Patrick, Eric, Chad (Kelly), Ted and Rusty (Whitney); 13 great-grandchildren, nieces, nephews and friends. He was preceded in death by his parents, one daughter, Christina Collins, one son, Ted Collins, siblings, Otis, Evelyn, Orville and Eleanor. Friends will be received from 4:00 p.m. to 8:00 p.m. on Monday, October 31, 2016 at KEMPER-MILLARD-KEIM Family Funeral Chapel, located at 351 Monroe St. Troy, MO 63379. Funeral service will be held at 10:00 a.m. on Tuesday, November 1, 2016 at the KEMPER-MILLARD-KEIM Family Funeral Chapel. In lieu of flowers expressions of sympathy may be made to New Fellowship Baptist in care of Kemper-Millard-Keim Family Funeral Chapel P.O. Box 222 Troy, MO 63379. Arrangements are under the direction of Kemper-Millard-Keim Family Funeral Chapel; 351 Monroe Street, Troy, Missouri 63379. Online condolences may be made at www.kempermillardkeimfamilyfuneralchapel.com Phone 636-528-8221

Earl Laverne Collins, 88, of Troy, Missouri, passed away on Friday, October 28, 2016 at St. Joseph West Hospital in Lake Saint Louis, Missouri. He was born on December 19, 1927 in Lincoln County and was the son of the late Arthur and Effie (Perry)... View Obituary & Service Information

The family of Earl Laverne Collins created this Life Tributes page to make it easy to share your memories.

Earl Laverne Collins, 88, of Troy, Missouri, passed away on Friday,...

Send flowers to the Collins family.