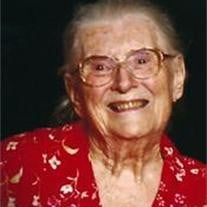 Elsie Emily Bueneman Brown, daughter of Robert and Elizabeth Bueneman, was born September 3, 1911 near Troy, MO. She went to be with the Lord on Thursday, December 06, 2012. After graduation from Buchanan High School in Troy, she was united in marriage to Rev. Perry E. Brown. They were blessed with a family of five children, to whom she devoted her loving care. As a pastor’s wife, Mrs. Brown served in many different roles in the churches Rev. Brown pastored, including Pianist and Director of the Women’s Missionary Society. Early in their marriage, the family moved to Springfield, MO, where they served in a pastorate for five years. They then moved to Hannibal, MO, where they lived for a number of years, continuing in ministry. Leaving Hannibal, she and Rev. Brown moved to Moscow Mills, MO. In 1975, Rev. Brown was called to pastor the Highland Prairie Union Church at Ethlyn, Mo., where they served until 1988. In 1980, they moved from Moscow Mills to their home four miles south of Troy, where Mrs. Brown lived until her 100th birthday. At that time, she moved to the Troy Manor. Mrs. Brown enjoyed the company of her family, and in her later years, she especially enjoyed the large family reunions, and encouraged all her children and grandchildren to attend. She also loved being surrounded by her flowers, for which a sun room was added to her home near Troy. She enjoyed traveling, and often reminisced about her trips to Grenada, Grand Cayman, Jamaica, Hawaii, and many locations throughout the United States. More recently, she kept busy with genealogy projects, and caring for her cats and their kittens. Mrs. Brown was preceded in death by her husband, Rev. Perry Brown, a daughter, Glenda Faye, and a brother, Ernie Bueneman. She is survived by two daughters, Carolyn Sue Smashey (husband David, deceased) of St. Charles, MO, and Rachel Anne Goering (husband William) of McPherson, KS; two sons, Paul Robert (wife Cheryl) of Boaz, AL, and Perry Everett, Jr. (wife Phyllis) of Arlington Heights, IL. She is also survived by eight grandchildren, eight great-grandchildren, and one great-great- grandchild; sister-in-law, Alberta Bueneman, nieces, nephews and many, many friends. Friends will be received from 1:00 p.m. to 2:00 p.m. on Saturday, December 8, 2012 at KEMPER-MARSH-MILLARD Family Funeral Home / Troy Chapel. Funeral services will be held at 2:00 p.m. on Saturday, December 8, 2012 at the chapel. Officiating the service will be Rev. Edgar Wegener. Mrs. Brown will be greatly missed by her family and many friends. Her cheerful smile, happy laughter and fun-loving ways, along with her wit and wisdom, were special gifts she shared with all who knew and loved her. Expressions of sympathy may be made to the Troy Manor. In care of Kemper-Marsh-Millard Family Funeral Chapel; P.O. Box 222 Troy, MO 63379. Online condolences may be made at www.kempermarshmillardfamilychapels.com Ph.(636) 528.8221

Elsie Emily Bueneman Brown, daughter of Robert and Elizabeth Bueneman, was born September 3, 1911 near Troy, MO. She went to be with the Lord on Thursday, December 06, 2012. After graduation from Buchanan High School in Troy, she was united... View Obituary & Service Information

The family of Elsie Bueneman Brown created this Life Tributes page to make it easy to share your memories.