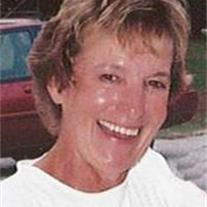 Ernestine Bond Jensen, 71, of Winfield, Missouri passed away on Friday, April 12, 2013 at her residence. Ernestine was born on December 14, 1941 in Michigan, and grew up in Dexter, Missouri. She was a daughter of the late Charles and Mabel Sietz. Ernestine was united in marriage to Don Jensen on September 24, 1988 in Lake Tahoe, Nevada. Ernestine retired after 32 plus years from Schnucks, she worked in various positions as a sales clerk and management. She enjoyed participating in bass fishing tournaments with her husband, Don. Ernestine had a passion for dogs, she was a woman with a lot of gumption, lots of humor and had a lot of life in her. There was never a dull moment with Ernestine and she was a firecracker. She is survived by loving husband of 24 years, Don Jensen of Winfield, Missouri; two daughters, Judi Hustermann of Troy, Missouri and Linda Studer and husband, Richard of Shelbina, Missouri; eight grandchildren, Tiffany McGraw (Ben), Lindsay Mann, Ryan Hustermann, Michael Studer, Courtney Hustermann, Lauren Studer, Leslie Schlote and Mike Eckard; three great-grandchildren, Morgan McGraw, Kaden Hustermann and Aubrey McGraw, nieces, nephews and many friends. She was preceded in death by her parents, two brothers, Ray Bond and Kenneth Bond and one son-in-law, Billy Eckard. Friends will be received from 4:00 p.m. to 8:00 p.m. on Monday, April 15, 2013 at KEMPER-MARSH-MILLARD Family Funeral Home / Troy Chapel. Funeral services will be held at 10:00 a.m. on Tuesday, April 16, 2013 at the KEMPER-MARSH-MILLARD Family Funeral Home / Troy Chapel. Officiating will be Pastor Wes Denham. Interment will be in Thornhill Cemetery. Expressions of sympathy may be made to PALS. In care of Kemper-Marsh-Millard Family Funeral Chapel; P.O. Box 222, Troy, MO 63379. Online condolences may be made at www.kempermarshmillardfamilychapels.com Ph.(636) 528-8221

Ernestine Bond Jensen, 71, of Winfield, Missouri passed away on Friday, April 12, 2013 at her residence. Ernestine was born on December 14, 1941 in Michigan, and grew up in Dexter, Missouri. She was a daughter of the late Charles and Mabel... View Obituary & Service Information

The family of Ernestine Jensen created this Life Tributes page to make it easy to share your memories.

Send flowers to the Jensen family.