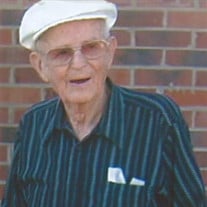 Eulis “Bud” Ray Pittman, 88, of Foley, formerly of Overland, Missouri, passed away on Friday, December 5, 2014 at his residence. He was born on August 11, 1926 in Doniphan, Missouri, a son of the late Thomas and Myrtle (Steele) Pittman. Bud married Lucy “Marie” Dunn on March 2, 1946 at the St. Andrew Lutheran Church in University City, Missouri. To this union one son and two daughters were born. Bud and Marie met at a show in St. Charles, Missouri and they both knew that it was love at first sight. They bought their first home and started a family in Wellston, Missouri. In 1969 they moved to Overland, Missouri, to be closer to family and recently moved to Foley, Missouri. Bud worked for Wagner Electric and retired after 38 years of dedication. For the last 22 years he worked at the St. Louis Auto Auction now known as Manheim, he drove his last car across the auction block on July 4, 2013. Bud was a car enthusiast, his favorites were the Model A and the Volkswagen. He enjoyed tinkering in the yard and fishing, even though it was not his strongest sport. Bud and Marie loved spending time together, whether it was going to yard sales, going out to dinner or just going for a drive. He is survived by his wife of 68 years, Lucy “Marie” Pittman of Foley, MO; his children, Marian M. Kozel and husband John of Overland, MO, Peggy A. Hoffer and Steven R. Pittman and wife Dana of Foley, MO; grandchildren, Rodney Hoffer (Debbie), Deana Hoffer, Johnny Kozel (Crystal), Michael Kozel (Beth), Brian Kozel, Rebecca Kozel, Melissa Shine (Michael) and Mathew Pittman (Stephanie); great-grandchildren, Dustin, Darrick and Rylee Hoffer, Justin, C.J., and Jared Kozel, Steve, Kayla, Brianna, Brandon and Tanner Kozel, Abbigail and Benjamin Uptegrove, Mattilyn Pittman and Edwin Shine, nephews, cousins and numerous relatives. He was preceded in death by his parents, his two sisters, Reva Darwin and Veda Pittman and one step-brother, Leo Winger. Friends will be received from 12:00 p.m. to 2:00 p.m. on Saturday, December 13, 2014 at KEMPER-MILLARD-KEIM Family Funeral Home / Troy Chapel. Funeral service will be held 2:00 p.m. at the Chapel. Expressions of sympathy may be made to the American Diabetes Association. Arrangements under the direction of Kemper-Millard-Keim Family Funeral Chapel; P. O. Box 222, Troy MO. Online condolences may be made at www.kempermillardkeimfamilychapels.com Ph.(636) 528-8221

The family of Eulis "Bud" Ray Pittman created this Life Tributes page to make it easy to share your memories.

Send flowers to the Pittman family.