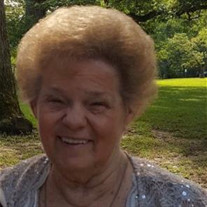 Florence L. Garriott, 79, of Troy, Missouri, passed away on Monday, December 25, 2017 at SSM Health St. Joseph Hospital in Lake Saint Louis, Missouri. She was born on October 20, 1938 in St. Louis, Missouri, a daughter of the late Arthur and Florence (Stark) Albright. Florence was united in marriage to the love of her life, Joseph W. Garriott, on August 29, 1959 in Piggott, Arkansas and to this union four children were born. Florence graduated from Buchanan High in 1957. She started her working career at the Gossertt Factory in Troy then worked for AT&T for several years and later Charles Wood. She was a member of the First Assembly of God in Troy and was an active member of the Silver Saints. Florence enjoyed embroidering and making her grandchildren quilts, which she cross stitched herself. She was an amazing cook who was known for her coffee cakes. Florence and Joseph enjoyed traveling across the United States and made their yearly trips to Texas during the winter months. She is survived by her loving husband of 59 years, Joseph W. Garriott of Troy, MO; four daughters: Nancy Jo Richardson and husband Tom of Santa Fe, MO, Connie McDonald and husband Steve of Silex, MO, Barbara Williams and husband Tim of Warrenton, MO and Dorothy Derr and husband Mark of Troy, MO; two brothers and three sisters: Roy Albright and wife Anita of St. Louis, MO, Warren Albright and wife Charlotte of Troy, MO, Luella Janosa and husband Frank of Virginia. Dorothy Boucher of Troy, MO and Betty Bauer and husband Steve of St. Charles; one brother-in-law, Robert Weir of Warrenton, MO; grandchildren: Christina Derr, Sara Derr, Stephanie Crowe, Caryn Yeager, Dawnelle McDonald, Ashley Hite and Craig Richardson; twelve great-grandchildren and another on the way, nieces, nephews, cousins and friends. She was preceded in death by her parents and one brother, Eddie Albright. Friends will be received from 4:00 p.m. to 8:00 p.m. Friday, December 29, 2017, at KEMPER-MILLARD-KEIM Family Funeral Chapel 351 Monroe Street Troy, MO 63379. A funeral service will be held at 11:00 a.m. on Saturday, December 30, 2017 at the First Assembly of God Church in Troy, MO. Interment will be held at the Old Alexandria Cemetery in Troy, MO. In lieu of flowers expressions of sympathy may be made to First Assembly of God Church in care of KEMPER-MILLARD-KEIM Family Funeral Chapel, P.O. Box 222 Troy, MO 63379. Arrangements are under the direction of KEMPER-MILLARD-KEIM Family Funeral Chapel; 351 Monroe Street Troy, MO 63379. Online condolences may be made at www.kempermillardkeimfamilyfuneralchapel.com Phone 636-528-822

Florence L. Garriott, 79, of Troy, Missouri, passed away on Monday, December 25, 2017 at SSM Health St. Joseph Hospital in Lake Saint Louis, Missouri. She was born on October 20, 1938 in St. Louis, Missouri, a daughter of the late Arthur and... View Obituary & Service Information

The family of Florence L. Garriott created this Life Tributes page to make it easy to share your memories.

Florence L. Garriott, 79, of Troy, Missouri, passed away on Monday,...

Send flowers to the Garriott family.