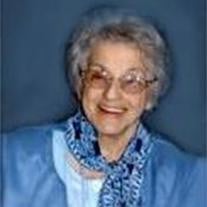 Florita Agnes (Schmidt) Witthaus, 85, originally of Troy, Missouri passed away at Colonial Springs Healthcare Center in Buffalo, Missouri on Monday, January 21, 2013. She was born in Machen, Missouri on August 30, 1927, the daughter of the late William F. and Florence Vogt Schmidt.. On November 1, 1947 at St. Francis Church, Portage-de- Sioux, she was joined in marriage with Virgil E. “Snap” Witthaus who preceded her in death in 2010. They enjoyed 62 years of marriage together. Florita grew up on a farm with five brothers and three sisters. One of her fondest memories was playing in the barn with her siblings; tunneling in the hay, roller skating in the hayloft, or jumping out of the loft onto piles of hay outside. She joined her siblings walking three miles along the Mississippi River to school, sometimes taking the shortcut through the plowed fields, and arriving with dirt clods on their feet. She had an amazing work ethic—instilled in her at a very young age. In St. Charles she worked for the Brown Shoe Company, and during the war she worked at a munitions plant where she learned how to solder. Her first job was as a housekeeper for a farming couple where the hired hand caught her eye and became the man of her dreams. Florita and Snap began their married life in Portage des Sioux, MO moving to New Hope near Elsberry, and finally settling in Troy. She worked at the Mears Heel factory in Troy while Snap farmed. Their farm on Hwy H was their dream come true. Together, they and their three children, raised hogs and sold Pioneer seed corn out of the basement of their home. Florita was an active member of Sacred Heart Catholic Church and for 25 years was a beloved bus driver for the catholic school. She enjoyed singing in the choir, praying the Rosary, and being involved in St. Ann’s Sodality. She even courageously took on the role as dinner chairman for the Sacred Heart picnic. She cherished her time spent in the Perpetual Adoration Chapel on Tuesday mornings. Her involvement in Cursillo only strengthened her quiet, deep faith and generous spirit that gave her strength and courage to face life’s trials and joys. She was also very involved in the community as a 4-H Community and Project leader, a member of the Spring Creek Extension Club, as well as a Reading Buddy at both Troy and Sacred Heart schools. She and Snap added light to the community with the 40 foot Christmas Star up on the hill. Florita and Snap had a wealth of friends and with them enjoyed pinochle games, square dancing on Saturday nights, chicken salad sandwiches, and jitter-bugging to their favorite tunes. A St. Louis Cardinal game was always on the television or radio unless her favorite soap, “As the World Turns” was on at the same time. She enjoyed raising her Pomeranian puppies and sharing them with her grand children. She had a great love for life and for her family and that zest for living and loving was evident in her until the very end. Always smiling, always kind, Florita was a selfless, loving wife, mother, and grandmother who will greatly missed by all her friends and family. Florita was also preceded in death by her parents, her brothers Raymond Schmidt, Lawrence Schmidt, and Melvin Schmidt, and sisters; Marion Eisenrich, LaVerna Stovich and Bernice Deen. She is survived by her two daughters, Diane Marie Bockhorst and husband Mike of Troy, and Brenda Kathleen Paul and husband David of Buffalo, Missouri and one son, Gerald Virgil Witthaus and wife Diane of Montgomery City, Missouri, nine grandchildren, eight great-grandchildren, and two brothers; Clarence Schmidt of West Alton, Missouri and Willis Schmidt of St. Charles, Missouri. Friends will be received from 4:00 p.m. to 8:00 p.m. on Friday, January 25, 2013 at KEMPER-MARSH-MILLARD Family Funeral Home / Troy Chapel. A Mass of Christian Burial will be held at 10:00 a.m. Saturday, January 26, 2013 at Sacred Heart Catholic Church in Troy with Father Ed. Doyle officiating. Interment will be held at St. John's Cemetery in St. Charles, MO. Expressions of sympathy may be made to the Colonial Springs Healthcare Center-Special Care unit or the Charity of Donor’s Choice in care of Kemper- Marsh-Millard Family Funeral Chapel; P. O. Box 222, Troy MO, 63379. Online condolences may be made at www.millardfamilychapels.com Ph.(636) 528-8221

Florita Agnes (Schmidt) Witthaus, 85, originally of Troy, Missouri passed away at Colonial Springs Healthcare Center in Buffalo, Missouri on Monday, January 21, 2013. She was born in Machen, Missouri on August 30, 1927, the daughter of... View Obituary & Service Information

The family of Florita Witthaus created this Life Tributes page to make it easy to share your memories.

Send flowers to the Witthaus family.